Volkswagen Polo 2021 – Four years after its launch, the Polo offers itself a deep facelift, touching both her stern and her bow. But the engine evolutions seem very meager, in the era of electrification.

When the Renault Clio switches to hybridization, when the Peugeot 208 offers a 100% electric variant, the Polo appears as the great forgotten one of the wind of electrification which blows on the Volkswagen catalog. Its new range of engines does not even offer no light hybridization 48 V, content to renew its offers 3-cylinder petrol in 80, 85 and 110 hp, available as standard or optionally with a 7-speed DSG dual-clutch transmission, depending on the variants. Added to this is a 90 hp unit that can run on natural gas, while waiting for the return of the 200 hp of the Polo GTi, promised for next summer.

The previous Polo, launched in 2017

It is therefore in terms of style that the ex-Ant has evolved in a remarkable way. Its facies is completely revised around the new VW logo which sits in the center of a thinner ventilation strip than before. It is underlined by LED extending to the base of new optics which feature matrix technology for the first time, optional. This new look is accompanied by new shields pierced with a large grille incorporating body color elements, like the Golf.

The big maneuvers at the rear

If, in profile, the restyled Polo is content to review the design of its wheels, we are surprised that the rear has benefited from such a beautiful budget envelope. So she is entitled to new lights, now split into two parts, to spill over the tailgate, once again to mimic its big sister. Like the latter, the name is now centered under the logo, when the shield revisits its look to frame its license plate holder with reflectors. 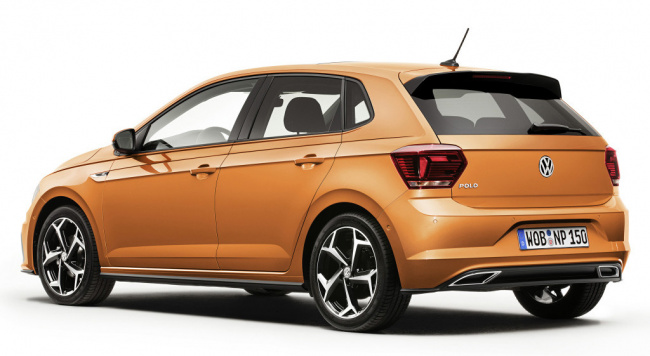 Against all expectations, the new Polo is deeply changing its stern.

On board, the Polo 2021 did not benefit from so many largesse, insofar as the design of its cockpit remains unchanged, with the exception of the steering wheel. Above all, it updates its technological background, by adopting a Digital Cockpit as standard, instead of analog meters, as well as a new infotainment system within an 8 ”central touch screen, devoid of physical controls, on high finishes. Finally, driving aids are improving, with theintroduction of IQ. Drive Travel Assist which allows semi-autonomous driving up to 210 km / h.

Launched this summer, the new Volkswagen Polo will see its prices rise, with a base price set around € 17,500.

The production version of the Volkswagen ID.Buzz is coming soon!