Mercedes C-Class 2021 test: our opinion behind the wheel of the German sedan

It is the only 206 not to be sold by Peugeot. She is the W206, code name given to the new generation of Class C, illustrious premium sedan, the best enemy of the BMW 3 Series and Audi A4.

The news extends over 4.75 meters, or even 4.79 meters for our AMG Line version, aesthetically more slender. But the revolution is elsewhere, and more precisely under the hood: on its entirely new platform, the German will only accommodate “electrified” engines.

That is to say endowed with at least one micro-hybridization and, at most, one rechargeable hybridization. And all the front trains, even that of the AMG sports version, expected at the very end of the year, will not support only four-cylinder engines.

That of the 220d develops 200 hp and has an electric boost of 20 hp, available in certain operating phases, supplied by a 48V starter-alternator integrated into the nine-speed automatic transmission.

Imperceptible, this device also contributes, and above all, to reducing average consumption, in particular by activating a “free wheels” function when the sedan is moving along.

To average consumption, given for 5.6 l / 100 km according to the homologation cycle, however, amounted to 7 l / 100 km on our model, in part because of the mountain passes taken during our various routes.

At the wheel, we never got tired of the C, sedan with pleasant and precise propulsion, which can be maneuvered from a well-designed seat, topped by a pleasant headrest that can be adjusted in all directions.

Despite too firm damping, due to the suspension specific to the AMG finish and optional 19-inch rims (900 €), the Mercedes offers enough comfort to satisfy Uber drivers, and enough dynamism to seduce driving enthusiasts.

But it will be necessary to put this heavy granny (1 755 kg) in the legs of a BMW 3 Series to compare its agility, probably a bit behind.

On board, the newcomer is making his revolution by resuming the presentation of the very recent S-Class limousine. 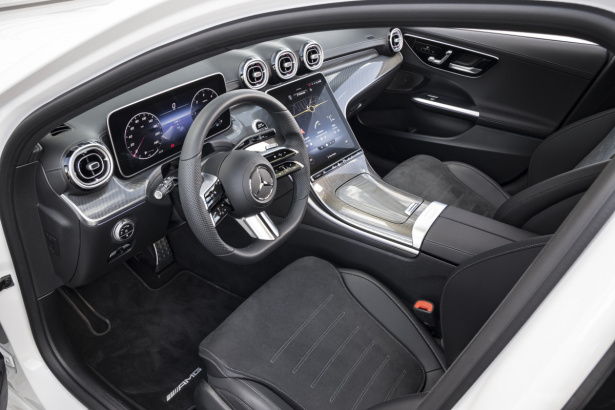 A configurable 12.3 ”digital screen, offering a multitude of displays, acts as counters. The 11.9 ”touch screen, in the extension of the central console and slightly oriented towards the driver, serves as the multimedia interface.

Responding to the operation of the MBUX2, this system is extremely complete, lively and intuitive.

It incorporates many systems released by the S-Class, including a fingerprint reading on the center console, to recognize the driver and adapt the environment (seat settings, pre-recorded radios, mood lighting, display of screens, etc.) to their preferences.

In principle, the new C-Class can also communicate with a connected home, answering questions or commands like “hey Mercedes, are the bedroom blinds properly closed?”Or“ activate central heating ”. He

It is only by using the sensor controls on the flat steering wheel – specific to the AMG Line finish – that ergonomics can seem complicated. But that’s just a matter of getting used to and, after a few tens of kilometers, the device was pretty well assimilated.

The new C benefits from an extended wheelbase of 2.5 cm, which does not prevent the legroom in the rear from stagnating; the livability remains very decent, but far from what offers a Skoda Superb.

This somewhat cramped character will serve Mercedes sellers, who could have begun to wonder about the interest to be taken, now, in the Mercedes E-Class. But in addition to a much tastier mechanical range, the big sister has a even more imposing size (4.94 meters) anda more pronounced sense of welcome.

What the E lacks is the taste for spectacle that the newcomer cultivates, and its fluidity, its curves or its sharp gaze.

But at this C, at least as expensive as its compatriots of rivals, it lacks some notions of comfort, a “real” controlled damping and a mechanical range capable of thrilling enthusiasts.

The risk is however measured for this sedan which, anyway, finds much less buyers in individuals than via businesses… 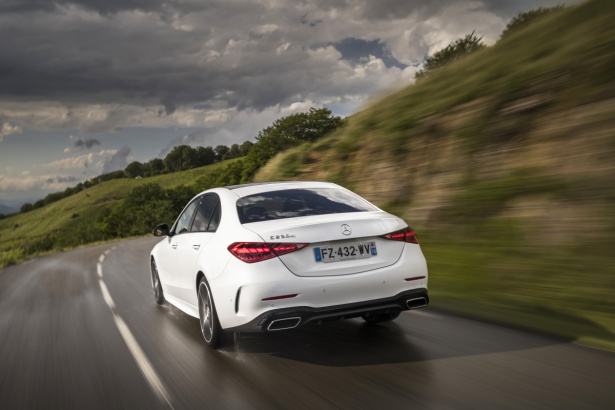 Unsurprisingly in terms of dynamics, the new C-Class surprises its world with a modern presentation, largely inspired by the S-Class, from which it also includes certain equipment capable of appealing to the most technophiles.

The Class C break, which has roof bars and a motorized tailgate as standard, is priced at € 1,500 more than the sedan. Its trunk volume reaches 490 liters, or 35 liters more.