Each year, the JD Power barometer reveals the ranking of the most reliable brands. For the first time, it is Kia who wins the prize, ahead of Toyota and Lexus knocked out of the podium.

In the United States, the American data analysis company JD Power produces an annual vehicle reliability barometer. In general, it is the Japanese who monopolize the podium, Toyota and Lexus in the lead. But this year, surprise: Kia passed first, followed closely by Hyundai, which belongs to the same group.

Kia and Hyundai in the top of the basket

The survey is based on the number of problems reported by 100 model owners in the last 12 months of using their 3-year-old vehicle. Thus, customers ranked Kia ahead of all other generalist and premium brands, with a PP100 (problems per 100 vehicles) score of 145, 47 points below the industry average. Buick ranks second with 147, closely followed by Hyundai with 148 on the PP100 index. In fourth position, we find Genesis (155 PP100), which therefore represents the most reliable premium brand. Toyota and Lexus only come in fifth and sixth, with 158 and 159.

Land Rover finished dead last in this ranking of 31 brands. Volvo, previously at the top of the basket, also finds itself at the end of the ranking, surrounded by Alfa Romeo and Ram. More surprisingly, Tesla is missing from the ranking due to the sample size being too small according to the study’s note. 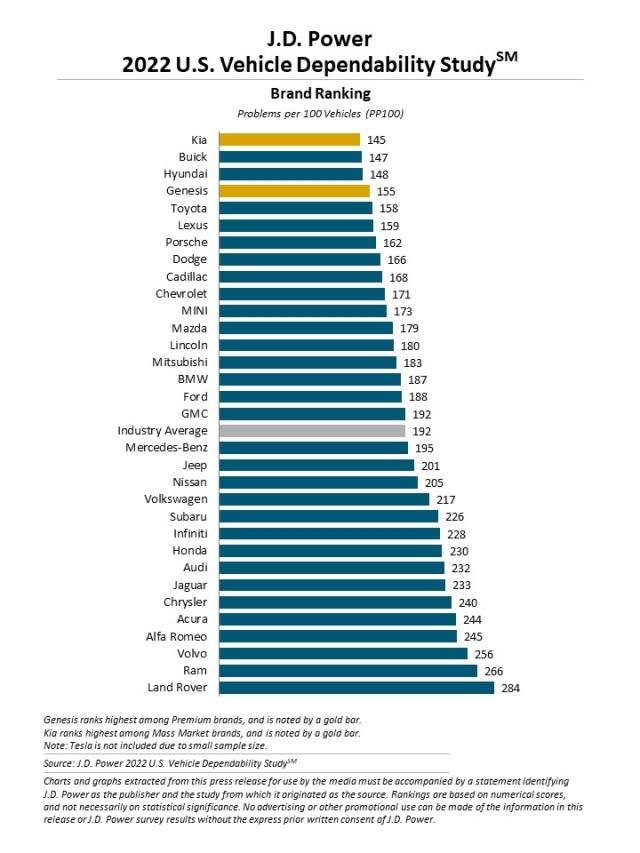 For this 33rd edition, JD Power has reviewed its methodology with new criteria. This partly explains the upset ranking this year. The survey now also covers driver assistance systems and infotainment, in addition to the seven other criteria: climate control, driving experience, body, features/controls/display, interior, powertrain and seats. For example, JD Power reviewed customer experiences after three years, such as checking to see if any updates had been made. According to the study, more than half of vehicles are affected by multimedia system problems.

Car reliability: our opinions, our advice, our choices – PODCAST

The 15 models recalled in 2022 after defects and incidents

Shortly after the marketing of the first Cayenne, Porsche had produced several concepts to enlarge the family: coupé, elongated version...

MotoGP: Yamaha and Quartararo, their last year of collaboration?