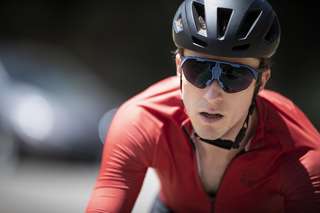 « A new vision of sport. This is the promise of connected glasses Engo-1 whose head-up display system broadcasts information on sports performance (heart rate, cadence, power, speed…) embedded in the field of vision, without obstructing it. Connected to a smartphone (Android Where iOS), a GPS or a Garmin watch, the Engo-1 are aimed at cyclists and/or runners who wish to gain in comfort and performance. Curious to find out how they work and verify the touted benefits, we spent several weeks trying the Engo-1 (395 €) as part of our mountain biking practice, coupled with an Android smartphone and a Garmin GPS Edge 1030 Plus.

Before getting to the heart of the matter, a few words about Engo. This is the brand created by MicrooLed, a French company based in Grenoble specializing in micro-screens. It was she who developed the ActiveLook head-up display technology with which the Engo-1s are equipped. This “optical engine” is also offered as an integration to third-party manufacturers. It is found in particular in Julbo’s EVAD-1 glasses as well as in the Cosmo Vision which were announced at Consumer Electronics Show early January. Equipped with glasses photochromics that automatically adapt to changes in brightness (protection UV 100 %), the Engo-1s are entirely assembled in Grenoble.

Above all, very good sports glasses

Accustomed to wearing light and very comfortable sports glasses, we expected to lose out by swapping them for the Engo-1s that we wrongly imagined to be heavy and bulky. Indeed, as soon as we unpacked, we noticed how these glasses are light (42 g) and very well designed. The different plastics used are of good quality and fit well. The frame is thin, with a semi-open design typical of sports glasses for runners and cyclists. The ActiveLook head-up display module integrated into the bridge of nose causes almost no visual discomfort. The flexible temples and nose bridge can be adjusted as needed to find the best position. A few minutes were enough for us to obtain a perfectly suitable setting. From our first mountain bike ride with the Engo-1s, we were immediately won over by their comfort. They stay in place and are quickly forgotten.. We were able to spend several hours in a row using them without the slightest discomfort, which is the first thing you expect from a pair of eyeglasses sports at this price.

The photochromic lenses of the Engo-1 are wide and very covering. Note that they are not replaceable because, as a representative of the brand explained to us, the adjustment of the optical engine is sensitive to the curvature of the lenses and must be done at the factory. It is therefore better to be careful in their use and storage to avoid scratches.

Commissioning the Engo-1s involves about ten simple steps. You start by adjusting the glasses to your face following the instructions (see the video tutorial). The ignition as the extinction of the Engo-1 is done by pressing a few seconds on the tactile zone above the nose bridge. It also works when you carries gloves.

After downloading theapplication mobile ActiveLook for Android or iOS and connected the glasses, it remains to continue the configuration by adjusting the position of the head-up display. It took us about ten minutes to complete the preparation and be ready to use our Engo-1s. The connection between eyeglasses and the smartphone turns out to be fast and stable and has never failed us throughout the many mountain bike outings we have been able to do.

Paired with a smartphone via the ActiveLook application, the Engo-1s can broadcast up to 22 different data among which the duration, distance, speed (+ average and max), cadence (+ average and max), heart rate (+ average and max), power, pace, positive and negative elevations or altitude. The collection of this data is partly based on GPS of the smartphone and on the sensors additional (cadence, heart rate) that can be associated via the app. This is done very easily from the “Settings” tab in the “Add a sensor” section which will automatically detect the sensors Bluetooth (To see the video tutorial) The most common.

From there, all that remains is to customize the display for each activity (running, cycling, multisport). Up to five custom screens can be created, each containing a maximum of six data. There are so many possible combinations. and can satisfy the most fussy athletes about monitoring their performance. To switch from one screen to another, simply make a swipe gesture with your hand at the level of the sensor. movement integrated in the upper left part of the mount. Every workout is saved in the ActiveLook app. For cycling and running, it is possible to recover the route trace in the form of a “.gpx” file.

For athletes who balk at the idea of ​​having to take their smartphone with them during training, the best compromise is to use a GPS counter or a connected watch Garmin, like the latest Phoenix 7S, 7 and 7X or the new Epix. For our part, we were able to test the Engo-1 with a Garmin Edge 1030 Plus, loaned by the brand.

For a Garmin watch, the association procedure involves downloading the ActiveLook application via l’App store Garmin Connect IQ (see video tutorial). For a Garmin GPS computer, the association is made by the data field (datafield) ActiveLook to download from Connect IQ (video tutorial). You can then display up to four different screens to choose from a list of eleven predefined screens. Then the Engo-1s automatically connect to the GPS or Garmin watch.

Although the installation went smoothly for us, the use of this plug-in deserves to be simplerin particular for the list of predefined screens that must be found in the descriptive sheet of the datafield in the Connect IQ store, which is also in English. Engo told us that they are working to improve ergonomics and make screen configuration more customizable.

We traveled more than a hundred kilometers MTB using the Engo-1, sometimes associated with the ActiveLook application, sometimes connected to our Garmin Edge 1030 Plus. While driving, the data appears in overlay on the right side, slightly offset from the field of vision so as not to interfere. The readability of the display is good and adapts to light conditions using a light sensor.

After a little time of adaptation in order to get out of the habit of lowering our head to look at the speedometer fixed to the handlebars, we began to appreciate all the advantages of this head-up display for our practice of MTB enduro and mountain. Whether it was technical ascents or descents, it was good easier and safer to throw a eye to data via the Engo-1s without losing sight of the passing terrain. Suddenly, this led us to be much more attentive to our performance in real time than before.

The only drawback as far as we are concerned, the need to wait to be on rolling and stable portions in order to be able to release one hand from the handlebars and change screens with a swipe gesture. But this is a problem related to our specific practice which does not apply to other activities.

The combination of the Engo-1 with the Edge 1030 Plus is particularly appreciable when you want to use the excellent navigation function of the Garmin computer. We used it a lot for discovery hikes on new tracks that we had loaded into the 1030 Plus. Thus, we could follow the guidance on the Garmin while consulting the information via Engo-1s without having to navigate between meter screens. This flexibility of use made us want to enhance our monitoring with new sensors to display our heart rate and our pedaling rate.

One of the great advantages of MicrooLed’s ActiveLook technology is its very low power consumptionenergy. Engo announces 12 hoursautonomy, which seems quite close to what we were able to obtain in real conditions (about 11 hours on average). Another positive point to underline, the connection with the smartphone is energy efficient and very little affects the autonomy of the latter.

Engo told us that it is working on the possibility of associating the application with a Strava account so that it can automatically transpose the traces of outings there. This new feature should arrive in the coming months. Also coming by the end of the year, an ActiveLook application for theApple Watch and the integration of step-by-step guidance via the OpenRunner app.

The Engo-1s are a great success. These are first and foremost very good sports glasses, light, comfortable and robust enough despite the on-board technology. The promise of more direct access to its sports data is kept. The connection between the smartphone and the glasses is simple and effective, the customization of the display offers wide possibilities according to the practices and requirements of each one. It is true that the Engo-1s are expensive, but this price seems justified to us in view of their quality and the real advantages they bring.

The note of Futura