Since Opel’s integration into the Stellantis group, all new Blitz models have benefited from the group’s synergy, sharing a number of components with their cousins ​​Peugeot, Citroën and DS. After the Corsa, clone of the 208, here is the new Astra, closely derived from the – new – 308. A model which is of major importance for Opel knowing that this compact has sold 15 million units in 5 generations since 1991. A model that took over from the Kadett whose origins date back to… 1936! Needless to say that at Opel we know the compact family well!

Strictly identical template and volume (4.37 m), very similar profile, the similarities with the 308 are obvious. The Astra, however, is distinguished by its specific front face “sight”, a new hallmark of contemporary Opel, a less “ribbed” profile than that of the Peugeot, from which it borrows its door handles and mirrors, and a rear end that is also more sober, underlined by an elegant signature bright. A profile made even more airy by the contrasting roof, varnished black, which dresses the high finishes.

The upper cutout of the rear doors is similar to that of the DS4, another model with which it shares not only its entrails but also its German production line, in Rüsselsheim, at Opel. Without forgetting a little nod to the latest generation of Kadett in terms of the quarter panel cut-out. In short, while giving it a real character, its line is revealed, in our opinion, much more sober than the “overdesigned” one of the 308. Opel also speaks of “pure and assertive” design. A SportsTourer station wagon version, already unveiled, will arrive very soon.

A sobriety found in the passenger compartment – ​​“detoxed” according to Opel – with a superb concave screen, called “Pure Panel”, twice 10”, the first for the fully digital counters, the second for the multimedia touch screen. Despite some borrowings from the French cousin, in particular at the level of the central console, very close, with the same automatic gearbox control-slider, the atmosphere is very different. Not only in terms of design, but also in terms of the steering wheel, here of “normal” size, and the readability of the counters, better than on board the 308. As on the latter, and the DS4, you can have a head-up display. 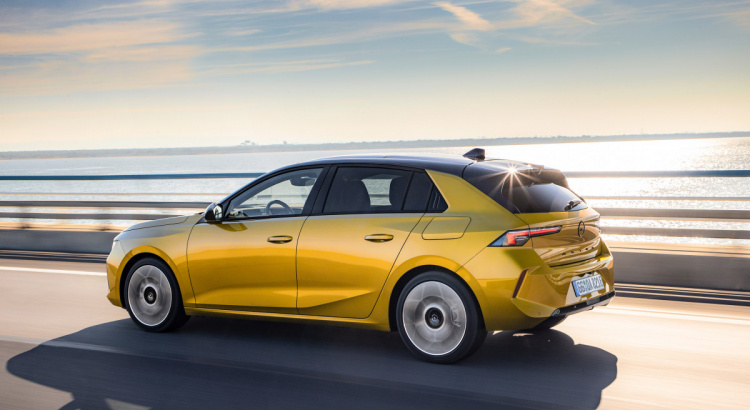 Stay an equally neat finish but a tad less refined… As for the habitability, it is identical, with the exception of a few centimeters less in width at the elbows, and an equivalent space in the rear legs, in the average of the segment. As on the Peugeot, the trunk loses 70 liters on this hybrid version due to the installation of the batteries under its floor, which leaves it only 352 liters, instead of the 422 liters of the other versions. There is also 30 liters of storage on board.

The ergonomics of the driving position is just as successful, and even better for those who don’t appreciate the “i-cockpit” of the Peugeot, and the seats labeled AGR, the famous German association which campaigns against back pain, even better than those, narrower, of the cousin , benefiting from the same label. The common commands, such as adjusting the sound or the air conditioning, are directly accessible, while most of the others can be configured according to individual tastes. 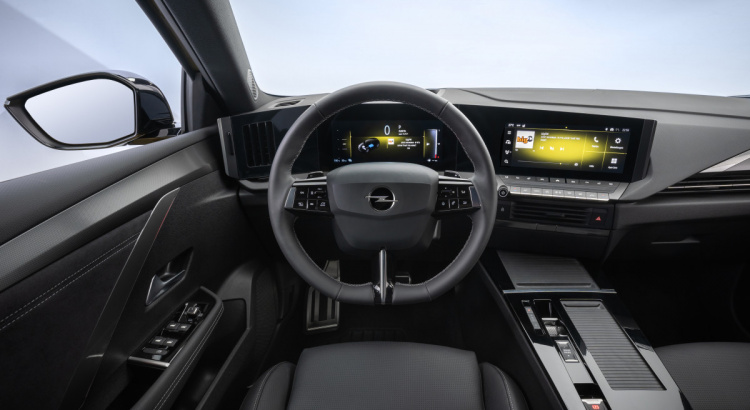 Can’t tell the difference between Astra and 308

Assuming that we can roll with our eyes closed, it is impossible to tell the difference between the two cousins. Logic you say. We find a direction and rolling trains with “railway” precision, which make this Astra the best of all. Not to say the best Opel ever in the field of dynamic qualities. As we have already observed at the wheel of the Peugeot, we only regret a too “locked” rear axle, to the detriment of driving pleasure. On the other hand, the Opel have never shone with their driving dynamism. Of which act.

Main area where this new Astra differs from its cousin, damping. While we had already judged it a bit too firm on the 308, it is much firmer here, to the detriment of comfort. ; not only are the percussions very dry on the unevenness at low speed, like in town, but, more annoying, this firmness persists at high speed, including on motorway junctions. All the more unfortunate that it brings nothing in terms of behavior. It is an arbitration on the part of Opel engineers, as for the simple fact of wanting to do something different. Or to pay tribute to generations of Opel whose first quality has never been comfort…

Fortunately, this firmness is largely offset by the excellent AGR seats of our Ultimate high finish. It should be noted, however, that our model, in its defense, was equipped with 18” wheels fitted with Michelin Primacy 4, not well known for their comfort. But our 308s too…

With its 180 hp and above all its cumulative 360 ​​Nm, this Hybrid 180 highlights the remarkable qualities of a chassis that “small” engines can’t even thrill! Performance proves to be well adapted and more than sufficient thanks to an omnipresent torque (thank you to the electric motor) and the always efficient 8-speed automatic transmission. It is only in the free acceleration phase, by pushing the gears to the maximum, that the 1.6 liter turbo tends to give voice in a slightly exaggerated way. During our three mixed courses, carried out with full battery, we noted consumption between 3.5 and 6.5 liters with peaks at 8 litersat the end of the battery and by whipping the mechanics.

In full-electric mode, Opel announces a range of 60 km according to the WLTP standard, which corresponds to approximately forty real kilometers. Knowing that recharging the batteries requires 7 hours on a mains socket and a little less than 2 hours on a Wallbox 7,4 kW.
We won’t list here the many comfort and safety features, again identical to those of the 308. auto and smartphone interface, this Astra is available to you from €23,750. A “customer advantage” of around €750 for the Opel, which can reach €1,900 for the Hybrid 180!

As rigorous as the Peugeot 308, more sober aesthetically and slightly more affordable, this new Astra does little more than core comfort…

Based on the 7th generation, this Golf hybrid – rechargeable – combines the pleasure and performance of its 204 hp...

E.Leclerc launches into wireless audio with its Linkster bluetooth headphones