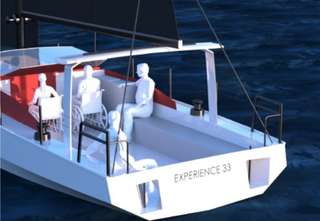 The Splashelec company has embarked on the design of a ten-meter sailboat suitable for able-bodied neophytes, experienced sailors and people with disabilities. It was with the 3DEXPERIENCE Lab program from Dassault Systèmes that the team was able to develop a digital twin of the boat in order to have the ergonomics checked in virtual reality by testers in wheelchairs.

Making sailing accessible to everyone, even people in wheelchairs, is the ambition of Splashelec, a company located in the city of Vannes and specialized in marine electronics. The company has already developed a mechatronic system for sailboats that allows a person in disability to steer the helm by acting on joysticks similar to that found on electric wheelchairs.

A system which can be used by everyone and which facilitates the handling of a sailboat by a neophyte. A flick of the joystick to the left and the boat goes to port, you pull towards you and the sail is also pulled. The system which makes it possible to control the bar adapts to all types of sailboats according to Splashelec. This brilliant invention that puts navigation within everyone’s reach is just the beginning. The company has embarked on a much more ambitious challenge. In the same spirit ofaccessibility to allSplashelec engineers embarked on the design of a complete 10-meter sailboat integrating both this system and suitable ergonomics.

Adapt a sailboat to make it accessible to people with disabilities handicap and to everyone is not an easy task. You have to start from scratch thinking about all the ergonomic details that this entails matter of accessibility. This is particularly the case for boarding, safety on deck, setting up a table to eat and share moments of conviviality on board, and even to go to the toilet. And it’s not just the ergonomics of the boat that you have to think about, but also other elements, such as, for example, keeping the navigator in a wheelchair safe, but also warm, when he’s in open sea in the cold.

Rather than jumping straight into making a prototype and modifying it as you go, Splashelec preferred to create a virtual twin. For this, the company was supported by the program of the 3DEXPERIENCE Lab from Dassault Systemes. It enabled the team to benefit from design software and modelization 3D. Digital tools that were used to create a digital model that can be used in a concrete way via virtual reality.

Who better than people with disabilities to achieve the tests and share feedback? This is how Splashelec organized an experiment in Saint-Malo to validate the ergonomics, accessibility and comfort of this particular sailboat. People in wheelchairs therefore lent themselves to the exercise with interest, emotion and even a part of wonder.

For more than realismthrough the virtual reality headset, the 3D modeling even represented the visible elements of the wheelchair. Valid or invalid participants could move around the boat and steer it using the famous joysticks. They were able to provide feedback on ergonomics so that the Splashelec team could modify the boat accordingly. Following this validation of the virtual, the company is now seeking financing in order to embark on the construction real life of this sailboat suitable for everyone.

Article produced in partnership with the Splashelec and Dassault Systèmes teams

Back-to-school good plan: a 30 GB package for less than 5 euros on the SFR network

Dispute a ticket? There is a site for that