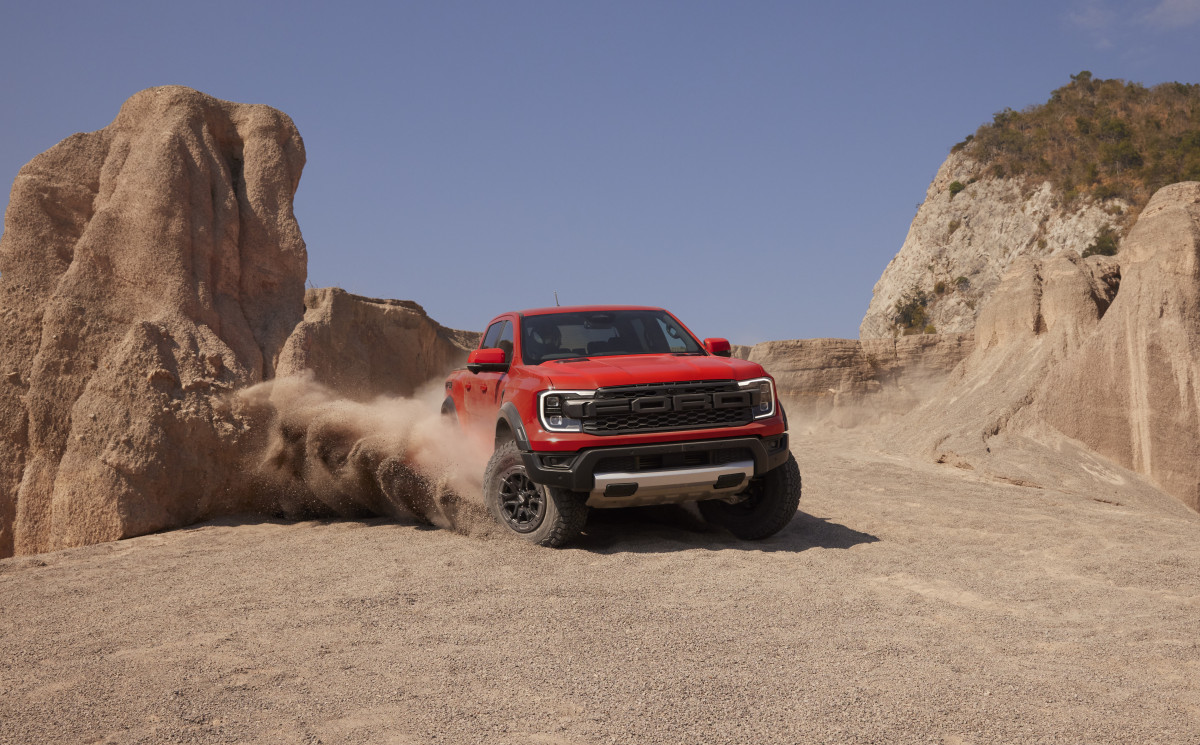 The Ford Ranger Raptor is back to play the scarecrow in this segment of mid-range pickups. What wood is he warming up with?

New Ford Ranger Raptor (2022) – After marrying the previous generation Ford Ranger, for the first time in Europe, the Raptor label returns to us on the brand new opus of the American pick-up, revealed last fall. A warm-blooded variant which will be the first to be marketed, at the very end of the year, as an amuse-bouche from the classic range.

On the other side of the Atlantic, when the F-150 pick-up adopts the Raptor coat of arms, it is to roar 450 hp under its disproportionately long hood. But, in our latitudes, his little brother was only entitled, until now, to 213 hp, or 43 hp more than the “normal” Ranger. Not enough to transfigure its 4-cylinder 2.0 l EcoBlue which however shines by raising its torque by around 160 Nm to reach the 500 Nm mark.

In 2022, the new Ford Ranger Raptor changes gear by swapping the “4 legs” for a 3.08 strong V6 biturbo with 288 hp. A coquettish characteristic which, unfortunately, counterbalances with a slight loss of torque (- 9 Nm) in comparison to the old Raptor. But above all, it is impossible to know the power difference with the base V6, since Ford has been silent on this information since the reveal of its new baby, in November 2021.

Ford Performance at the controls

Conversely, Ford is not stingy with technical specifics when it comes to this new reptile, the block of which was developed by the Ford Performance department. A new anti-lag system keeps the throttle open for up to three seconds after the driver releases the accelerator, allowing faster recovery of boost pressure and optimized combustion when the driver takes their foot off. In addition, the engine is programmed with an individual turbocharging profile for each of the gears of the 10-speed automatic transmission.

For his part, the electronically controlled active exhaust system allows you to play vocalizations, depending on the selected mode, 4 in number, from the quietest (Quiet) to the most talkative (Baja) to be reserved for off-road use only. The running gear is not to be outdone and is lighter thanks to the use ofaluminum in the suspension armsassociated with new High performance Fox Live Valve shocks. And for the first time, the Ranger Raptor benefits from an e-AWD system. It’s about a all-new electronically controlled two-speed transfer casecombined with front and rear locking differentials. The new Ranger Raptor also features Trail Control which is akin to a cruise control for off-road driving. The driver simply selects a speed below 32 km/h and the vehicle manages its acceleration and braking while the user concentrates on driving on difficult terrain.

In terms of looks, the new Raptor dazzles with its widened wheel arches as well as the light signature highlighting the width of the vehicle while the FORD lettering on the grille and the separate bumper add to its muscular visual appeal. Specific all-terrain 17″ tires are assigned to the Ranger Raptor. There are also specific air intakes and cast aluminum side steps, while the Precision Gray rear bumper features an integrated step and raised tow bar.

Inside the vehicle, the Raptor offers new sports seats, directly inspired by the F.22 Raptor fighter jets. Orange hues on the dash, trim and seats are mirrored by the Ranger Raptor’s ambient lighting, which bathes the interior in an amber glow. A heated sports steering wheel in premium leather with thumb reinforcement, center marking and magnesium shift paddles add to the sporty ambience.

The latest digital technologies are also included, such as 12.4″ slab housed behind the steering wheel and one 12.1″ center touchscreen featuring the next-generation Ford SYNC 4 connectivity and entertainment system, Apple Carplay and Android Auto compatible, not to mention an eight-speaker B&O audio system.

Spear at the very end of 2022, the new Ford Ranger Raptor has not yet revealed its price. According to our estimate, it will easily exceed the 65 000 € insofar as the current one is already claiming more than €60,000 including tax.

2022 Ford S-Max Hybrid test: the best of both worlds

Ford Bronco Raptor: more than 400 hp for the American franchisor

Car of the year 2023: what chances for the French women in the running?

Two major new French models are among the contenders for the title of Car of the Year 2023. What are...

Good deal: Amazon is selling off the Huawei Watch GT 2 connected watch at -39%

This 50 GB mobile plan with no duration condition is only €7.99