Renault Kangoo 2021 test: our opinion behind the wheel

Or can drive a Kangoo and dream of Porsche, but the reverse is also true. Because French, in its own way, is desirable.

And it can, like the first versions of the Scenic and Nissan Qashqai, boast of having “invented” a segment: that of ludospaces, these extremely practical models, derived from utility vehicles.

Replacing a classic Renault Express in form, with a cubic body adapted to a basic interior, the first Kangoo landed in 1997 with a “smooth roof”. And it popularizes the sliding side door which, for the utility versions as for the models intended for families, makes everyday life easier.

VIDEO – Our test of the new Renault Kangoo

The second had lengthened by 17 cm, this one still extends 19, to reach 4.49 meters long! At this rate, the fourth version will no longer fit in your garage.

But if it grows over time, the Kangoo also matures: always more modern, always better equipped and always safer, the machine, which is based on a Scenic platform but has specific running gear, no longer has much in common with the original model. Except, perhaps, basic soundproofing.

If Renault insists on the progress made, this sound aspect suffers from an imposing size and, above 100 km / h, aerodynamic noise becomes heavy.

Medal of the reverse, it is this same imposing size which gives the MPV its main qualities: a giant roominess and an XXL trunk. Especially since the rear seats are lowered when the backrests are folded 2 / 3-1 / 3, while leaving a flat floor.

The boot then goes from 775 liters to 3,500 liters, even when the right front seat is folded down (an impossible maneuver in Intens finish).

The Kangoo is so clever that it’s forgiven for the lack of individual rear seats or sliding bench seats. For the latter, it will be necessary to wait for the arrival of a long version, in 2022, capable of accommodating seven places on board.

Among the details that make life easier, let’s first mention storage: there are everywhere, from the large door trays to the front central armrest, via the roof overcab, the storage compartment on top of the dashboard, the trunk located in front of the steering wheel and the glove box in drawer.

To satisfy all drivers, the amplitude of the driving position settings has been greatly revised upwards, and the steering wheel can be adjusted both in height and in depth.

The balcony box order fits perfectly to hand, and the ergonomics do not suffer from any major flaws. We can imagine going on a weekend, with the family, aboard this Kangoo.

Renault has even created a small removable arm serving as a smartphone holder (100 €), to be attached to one side or the other of the meters, as well as modular roof bars (300 €) from which, in one minute and without tools, a gallery can be formed in order to install a box or ski racks. Smart.

Other advantages: front doors with an opening angle of 90 °, and sliding sides. Professionals will appreciate, on the utility version, the possible disappearance of the vertical upright located between the front right door and the sliding side, thus freeing up a very wide access to the loading volume.

Finally, at the rear, the huge tailgate, devoid of independently opening window, can be replaced by asymmetrical hinged doors.

However, some will have noted the absence of side protection strips, optional at € 220, and the rear compass windows, unpleasant for the rear passengers. Fortunately, they can be replaced by conventional “descending” electric windows.

So far, it is by its practical aspects that the Kangoo has shone, not by its road performances. And that will not change: this van proves to be very safe, supervised by a castrating ESP, and not unpleasant to drive. 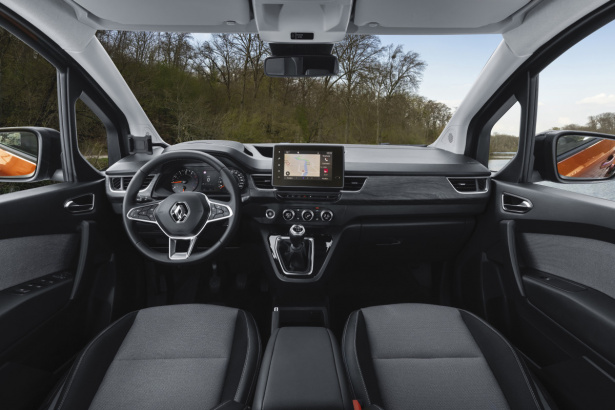 But it is not for its dynamism or for its precision that we will order. The damping is intended to be a bit too firm at low speed, where the speed bumps do not go unnoticed, but it deserves more stiffness once launched; cash movements appear to be insufficiently maintained.

Under the hood, in aluminum, gasoline engines of 100 and 130 hp are offered, while the diesel range displays 75, 95 or 115 hp. All mechanicals come with a six-speed manual transmission, and an EDC7 robotic transmission can be combined with the 95, 115 and 130 hp engines.

The mid-size diesel engine could well make the majority of sales, even if it remains a little tight in acceleration, with a 0 to 100 km / h shot in a quarter of a minute. Fifteen seconds is a long time.

The small Blue dCi compensates with good availability allowing it to gently revive from 1,500 rpm. And on the consumption side, our reasonable pace resulted in an average of 6.2 l / 100 km.

This does not prevent the obligatory passage through the penalty box: it will be necessary to add at least 240 € to the final invoice.

An almost negligible amount compared to the facial price of the Kangoo: € 25,900 in Blue dCi 95 ch Zen (reversing radars, blind spot monitoring, 8-inch touch screen, etc.), or even € 1,500 more for this Intens version, with full equipment.

French, produced in Maubeuge, near the Belgian border, then adds automatic air conditioning with two zones (with air vents towards the rear), automatic switching from high beam to low beam, a GPS as well as a “hands-free” access-start… still in operation. option at Porsche! 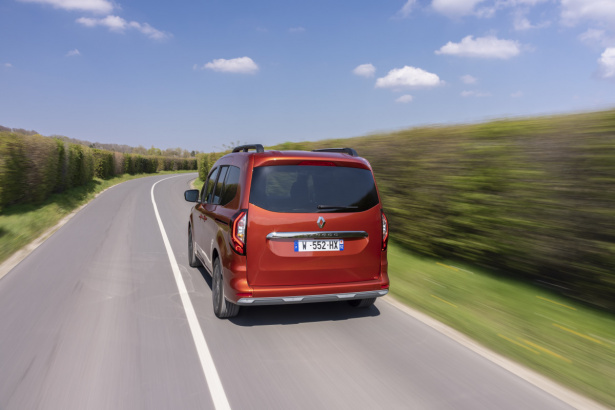 This historic rival of the Citroën Berlingo resurfaces among the references of the segment. Full of tricks, the Kangoo is pleasant, despite its still average soundproofing.

The Kangoo will also be sold by Nissan and Mercedes.

The electric version of the French will be renewed, with a 75 kW engine (102 hp) and a 44 kWh capacity battery.

Renault Clio vs Dacia Sandero test: which one to choose? – VIDEO