The German brand Volkswagen has just unveiled a sporty version of its electric SUV. The Volkswagen ID.4 GTX announces 300 horsepower, all-wheel drive and 480 km of range.

While the Volkswagen ID.4 has just started marketing, the manufacturer offers the first declination sporty in its electric range with the ID.4 GTX. In the history of Volkswagen, the name GTX was used for the Scirocco and Jetta models. The Volkswagen ID.4 GTX is entitled to a specific finish: a three-way light signature Led at each end of the bumper, the roof and spoiler tinted in black and full painting of the doors instead of the part in plastic black of the standard version of the ID.4. And of course, GTX logos scattered on the body and specific 20 or 21 inch rims.

Inside, Volkswagen customized the series with ‘GTX’ branding on the front seat backrests, red stitching, inserts on aluminium and black lacquered as well as mood lighting 30 colors customizable. But it is obviously the performance of the Volkswagen ID.4 GTX that is of primary interest. Designed on the platform MEB common to the electric models of several brands of the group, it receives two electric motors on the front and rear axles which total 220 kW or 299 hp for a torque of 460 Nm. The whole is associated with an all-wheel drive and a 77 kWh battery which offers up to 480 km of autonomy. An identical configuration to that of theAudi Q4 50 e-tron quattro whose autonomy is however a little higher (497 km).

The Volkswagen ID.4 GTX is compatible with fast charging up to 125 kW, which allows it to recover 300 km in 30 minutes. Its marketing in Europe will begin this summer. The price for France is not yet official, but in Germany, Volkswagen announces a base price of 50,415 euros. 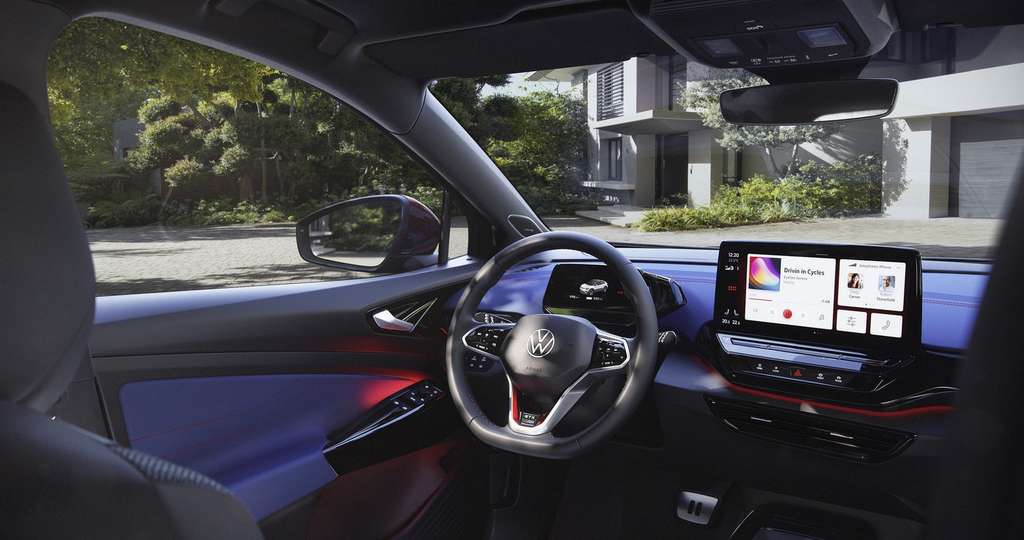 The interior of the Volkswagen ID.4 GTX is entitled to some specific aesthetic elements. © Volkswagen

VIDEO – Between this car and this SUV, the fight was fierce … or not