Speed ​​cameras: some panels will disappear

Road Safety will speed up the deployment of new signs announcing speed camera checks, in order to limit confusion between signals.

Historical radar panels as we know them since 2003 are probably living their last months. After several years of deployment, Road Safety intends to accelerate the democratization of new panels on the side of the roads.

The objective of the latter, present since 2017, is provide more information to drivers. One of these signs thus indicates the maximum allowed speed. The other the distance over which radar checks are carried out. They take up the usual drawings of the waves, with a car and a motorcycle.

On the other hand, no truck is listed. Mentions “for your safety, automatic checks” or “for your safety, frequent radar checks” are also no longer listed. The beginning of the end of a certain hypocrisy regarding speed control? 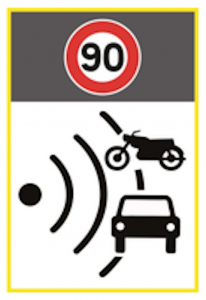 Deployed since 2017, these panels then cohabited with the original signals. What to wear four the number of displays Of this genre. And so, multiply somewhat the risk of confusion.

The transition period should therefore soon be over. And the old panels to disappear. Which sounds like a small revolution. The latter are indeed present on the edges of the roads since 2003. A year coinciding with the commissioning of the first automatic speed camera, in La Ville-du-Bois (Essonne).

Initially, they simply displayed a car, a motorcycle, without mention. Until 2010, when the mentions mentioned above and a truck appeared. Backtrack, therefore, for the new panels. The fact of not having any mention written in French could allow more understanding for foreign motorists.

If the panels change, however, their mode of operation should not change. They will always be placed several hundred meters upstream of a speed camera (600 meters on the motorway, 400 meters on a road limited to 90 km/h).

Unusual – a radar to drive… faster!

Speedcam Anywhere, and your smartphone becomes a radar

Comparison – What is the low-cost fast charging of Lidl terminals worth compared to Ionity?

The supermarket specialist Lidl has just entered the charging station market. With its very attractive prices, can this new player...

A motorist driving a Volkswagen Golf 8 Type R was arrested by the Marne gendarmes at 264 km / h...

Good smartphone deal: the Samsung Galaxy A53 5G at a bargain price on Amazon!

Good deal: the Marshall Stanmore II Bluetooth speaker is on sale on Amazon

The iPhone 11 at 1 euro (+8euros/month), it’s possible at Bouygues Telecom!