For its second generation, the Japanese SUV demonstrates that a good plug-in hybrid is above all a good hybrid. Our test.

Late, Lexus? The manufacturer is (finally) releasing its first plug-in hybrid vehicle. But that absolutely does not mean that the Japanese brand is part of the little group technology side. It’s quite the opposite. Evidenced by the all-new NX, BMW X3 or Audi Q5 format. He joins the ever-growing round of premium plug-in hybrid SUVs. If the “classic” hybrid version is also offered in the catalog, Lexus relies on a sales mix made up of 70% PHEV. For now, the French tax system and European standards remain favorable to hybrid hybrids …

No design revolution. The machine gains a little seat (+ 2 cm in length and width), but takes again the visual identity abundantly copied – including in France – of the first version, launched at the end of 2014. Namely, a shapely silhouette marked by aggressive lines and the now famous hourglass grille divided into an “L” on our top-of-the-range F-Sport version. The daytime running lights return to the optical unit at the front. The stern is now barred by a light strip, overhanging the Lexus monogram. Despite appearances, 95% of the parts have been renewed.

Very rich in buttons on the first generation, the interior is looking for more simplicity here. The soft-touch steering wheel houses the bulk of the controls. But the ergonomics remain complex: it took us several minutes to display our average fuel consumption. The driving position at height will appeal to those who enjoy dominating the landscape in a very comfortable chair. When maneuvering, pay attention to the high beltline which limits lateral vision on the passenger side. Fortunately, the maneuvering camera (front and rear) helps limit blind spots.

The images are displayed with good definition on a 14-inch maxi-screen. Compared to the previous generation, it is closer to the pilot and becomes tactile. The slab is distinguished by its speed of execution. The system is compatible with Apple CarPlay and Android Auto. The panel is accompanied by two rotary selectors making it possible to adjust the temperature of the passenger compartment without going through menus. Hooray! Below, there is an induction phone charging location and the report command. The materials and fittings are of excellent craftsmanship, as always with Lexus. Particular sign of the NX: we now push a button to open the doors. Lexus even provided its SUV with a radar locking the opening when a cyclist approaches, avoiding collisions (optional). In the cargo compartment, the hybrid and plug-in hybrid versions are on an equal footing: the 525 liters of cargo are in the category average.

Start button, not a noise. The machine takes over the ecosystem of the Toyota Rav-4 PHEV and Suzuki Across, with some modifications in the electronic management. Centerpiece: the atmospheric 2.5-liter “big block” given for 185 hp. Operating according to the Atkinson cycle and with a high compression ratio (14: 1), it works in symbiosis with two electromotors. The most powerful is located at the front, the second at the rear. In total, the machine claims 309 hp cumulative. The 18 kWh battery is located under the floor (on the bench seat on the conventional hybrid).

The machine takes off in 100% electric and remains there up to 135 km / h. The 4-cylinder only wakes up when the foot is heavy or when you select the mode prioritizing battery charging while driving on the center console. Once the bottom level of the accumulators is reached – after 65 km, that is to say significantly later than its rivals – the NX is transformed into a conventional hybrid vehicle of excellent quality. We are far from PHEV where electric motors and empty accumulators quickly become dead weights. At this point, the on-board computer told us less than 7 liters on average on a mountainous road unfavorable. An honorable performance considering the mass of this Lexus. This satiety compensates for the somewhat long recharging time (2h30 with the 6.6 kW on-board charger). Another good news: the 55-liter tank allows for long motorway routes. 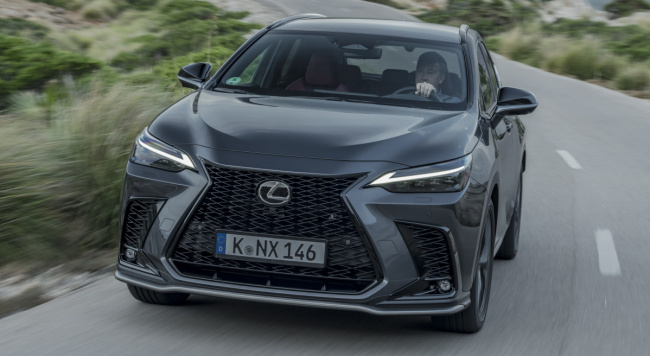 Everything is done in silence and flexibility. Conventional – MacPherson at the front, double wishbones at the rear – the damping impeccably erases the imperfections of the road outside the built-up area. Only criticism on this point: it “hits” too much for our taste on blackcurrants crossed at low speed. The roll is not very sensitive, the pitch more. This especially feels under braking, the usual Achilles heel of plug-in hybrids. In town, the pedal feels natural to the right foot. It’s better than the competition. But with its 1,155 kg on the front axle (total weight: 1,980 kg), the NX logically dives on hard braking. We salute all the same the better control of the chewing gum effect, linked to the continuously variable transmission. Not very communicative, the electrically assisted steering does not encourage you to drive with your sword either. This comfortable SUV is appreciated more on pendular routes negotiated in flexibility. Not forgetting, of course, to plug it in at night.

Comfortable and modern, the NX has the good taste of not dropping electricity after 50 kilometers.

The Lexus NX range and prices

Lexus UX: which one to choose?

Lexus NX: all the info on the plug-in hybrid SUV

Mercedes T-Class test: our opinion at the wheel of the MPV that claims to be premium…

Madame Mercedes is happy to introduce you to her daughter, baptized Class T, born in France and first cousin of...

Why the price of electric cars will increase until 2026

The arrival of the electric car was accompanied by a promise of lower prices over time. This is also one...

An association considers a road in this city too dangerous

In Nice, an association considers the Prom' too dangerous and calls for the installation of radars and the removal of...

Electric cars, charging operators: towards the emergence of “new GAFAMs”?

Electromobility is one of the new playgrounds for innovative companies. A sector that could encourage the emergence of giants of...

With its dual optics, this Canon photo lens can shoot in 3D

Bouygues Telecom promotes its 80 GB package at € 12.99 and not only the first year

Save money with this 80 GB package at only €12.99 at Bouygues Telecom