Toyota GR010: the secrets of the new 24-hour hypercar of Le Mans

Yes, car pilots read. These last years, the Toyota Gazoo Racing team regularly had copious volumes published for its sprinters, Sébastien Buemi, Kamui Kobayashi or Mike Conway. It was the TS050 Hybrid user manual, prototype with which the Japanese brand won the last three editions of the 24 Hours of Le Mans. “16 pages just for the wheel” had reported Fernando Alonso, a little taken aback, during his victorious passage in the squad in 2018 and 2019.

On the occasion of the entry into service of the manufacturer’s new weapon, the pilots will still go to the stake. The Toyota GR010 has made its first laps of the wheels in December on the Paul-Ricard circuit, then in Portimão (Portugal). “I asked the team for the manual, but it has not yet arrived” smiled Kazuki Nakajima, during the presentation of the machine in January. “There are still adjustments to be made, but I think it will still be a little thinner”.

Because the GR010, responding to the unprecedented Hypercar regulations, will have a divergent character compared to its predecessor. Designed with cost control in mind, the texts approved by the International Automobile Federation and the Automobile Club de l’Ouest (co-organizers of the endurance world championship) simplify the hybrid technologies used since the early 2010s. Regulators can congratulate themselves on their seduction operation after manufacturers: Peugeot then Ferrari will return to Sarthe by 2023. At Toyota, drivers and engineers must adapt to the new situation.

=> Why is Porsche coming back to Le Mans?

=> Peugeot Hypercar: the technical choices of the Lion

“We only took a few buttons or sensors from the TS050,” explains Pascal Vasselon, the team’s technical director. “The big novelty is logically the power chain”. Exit the 2.4-liter V6. Place a new block more massive (but also more sound) of 3.5-liters capacity. He is force-fed by two turbos. It will now be supported by a single hybrid system (Kinetic Energy Recovery System or Kers), recovering and redistributing the energy stored in a battery only to the front wheels. Previously, Toyota used two devices connected to the two axles.

This is who transforms the experience at the helm. Already in a straight line. Until now, the observer at the edge of the runway remained baba. After the chicanes of the Hunaudières or at the exit of Arnage, the TS050 took advantage of its all-wheel drive, the enormous amount of energy stored during braking and the adjustable deployment of its power to catapult itself from 100 to 300 km / h in a blink of an eye in an electric whistle … A few seconds after having scampered off, once the lithium-ion battery was empty, the LMP1 maintained its speed thanks to the 500 horsepower of its thermal engine.

However, the new regulation forbidden to the electric motor – limited to 200 KW (272 hp) – to intervene below 120 km / h. Beyond this speed, the heat engine and the Kers work together, but cannot generate more than 500 kW (680 hp) in total. The thermal block is therefore more stressed, explaining the increase in displacement chosen by the team based in Cologne.

“The power curve is much closer to a traditional proto like the LMP2 (Ligue 2 prototypes, editor’s note)” concedes Brendon Hartley, winner at Le Mans last year and ex-driver Toro Rosso in F1, “That will change the way we deal with traffic. We will rely less on acceleration and more have to dive under braking ”. Which will not be without risk in the heart of a GT peloton.

Speaking of braking, everything is different on this GR010. First major change: no need to let go of the accelerator long before the turn. On the TS050, pilots had to take their right foot off the pedal one to two seconds before pressing the left one. This technique, called lift and coast, made it possible to save fossil fuel and accumulate more electrical energy for redeployment at the exit of a curve.

Driving, that’s pretty good news. “It feels good to be able to stay fully” rejoices Sébastien Buemi, also called on to save energy at Nissan e.dams in Formula E. Another advantage: “We will no longer have to look in the retro and be afraid that the driver behind us will push us”, rejoices the Briton Mike Conway . The TS050 driven by Nicolas Lapierre had experienced an accident of this type during the 2017 edition, putting the machine out of the race overnight.

The new legal environment also prohibits the use of brake-by-wire on the rear axle. Toyota therefore returns to good old hydraulic braking. “We have fewer possible combinations of settings in this area,” confesses Brendon Hartley. “The feeling is more predictable,” replies Mike Conway. Above all, the consequent mass of the GR010 extends the braking distances. The machine officially weighs 1,040 kg, against 884 kg for its predecessor.

Larger (+ 25 cm in length, + 10 cm in height and width), the Japanese hypercar will also benefit from less downforce. The regulations set maximum levels of drag and downforce, to allow builders more stylistic freedom. The GR010 also incorporates some design elements that will appear on the future GR Sport approved for the road. Only one body kit will be accepted per season of the endurance world championship, with a mobile element depending on the circuits: Toyota has opted for the rear wing.

The speed of passage in the curves in the White House sector will logically be reduced. With acceleration losses, the Toyota should turn in 3: 25-3: 27 over the 13 kilometers of Le Mans, or a loss of ten seconds per lap. The machine remains swift. “On paper, I was a little worried, but the result is better than I expected,” says Sébastien Buemi. 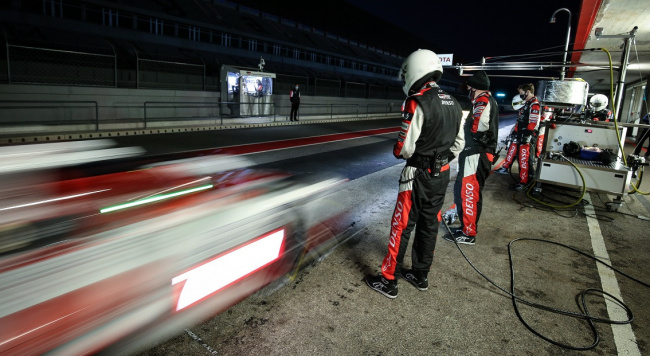 The Swiss had also carried out the first burn-in session. “The first day went well. We rode almost as much as in a classic session, even if we had a few surprises ”. Which ones? ” Details. We thought that the systems would work in certain temperature windows but the taxiing denied us. We also had surprises in terms of tire management. It’s always like that when you go from the wind tunnel to the runway ”. In the month of January, 6,000 kilometers had already been covered by the first available chassis. Officially, without a major reliability alert.

Before his first race in the spring, the tests continued in particular on the circuit of Alcañiz (Spain). The intensive week scheduled for mid-January has been canceled due to snowfall. “We are happy that the debut of the Hypercar category has been postponed by 6 months due to the pandemic,” admits Pascal Vasselon, the technical director. Our departure schedule was unrealistic“. Despite still limited running, the brand does not hide its objectives: the two titles of world endurance champion and the double at Le Mans.

If Cologne will have to face a limited competition (Alpine with a bridled Oreca LMP1, then the two Glickenhaus from the second round of the WEC season), a performance balance will be responsible for balancing the lap times between the different prototypes. Weight penalties could reward the GR010 if it proves too fast. “We will have to learn to evolve in this environment” concedes Pascal Vasselon, the technical director.

And if the performances are leveled, other factors will make the difference: speed of execution of the refueling, use of the tires on the track, traffic management … “You have to do the perfect race to have a chance of winning, Brendon believes. Hartley. The existence of the scale puts more emphasis on the pilots ”. For men, there are no instructions for use.

All future hypercars entered in Mans

Why Audi is coming back to the 24h of Le Mans and the Dakar?

WEC 2021 calendar: dates and times of the races of the endurance world championship

24 hours of Le Mans: the 24 cars that made history