The biggest event dedicated to Ducati was held this summer at the Misano circuit, near Rimini, Italy. A colorful event, especially marked by red, which brought together no less than 80,000 spectators and almost as many motorcycles, during three days of celebration.

After four years of absence, the Word Ducati Week 2022 had to live up to it.

The Bologna firm has put the dishes in the big ones with a program full of surprises: testing of new products on all terrains, round tables with the stars of each discipline, stunt demonstrations, track baptisms, parade, concerts« Rusty and especially the Lenovo Race of Champions.

In order to live the experience as best as possible, Ducati France had concocted a 4-star immersive program for us. Leaving from the Grenoble concession, we took control of our mounts, Multistrada V4S, the must to swallow all the planned kilometers and take our little things.

A trip of nearly 600 km in half a dayvia the mountains and various passes, from Bourg D’Oisans to Sestrières, via La Grave, Serre-Chevalier, Briançon and Mongenèvre, to reach Bologna, the brand’s parent company.

The ideal way to warm up and enjoy a private tour of the museum the next day, in the heart of the Borgo Panigale factory, before heading to the event 150 km away. Branded with a hot iron, we were ready to dive into the Desmo universe.

Arriving on the Marco Simoncelli circuit in Misano, we understand that the event is not insignificant.

In addition to the innumerable twin-cylinders that one crosses for 50 km around, the bars and restaurants decorated for the occasion and even an abandoned 916 like a totem on a roundaboutit is the entry of the circuit which clearly marks the spirit.

We enter the enclosure as we enter a parallel universe, where red predominates, the muffled sound of V2 and V4 mingles with the clack of dry clutchesall in an indescribable atmosphere.

The stifling heat will not have discouraged any of the followers of this veritable sect, some of whom did not hesitate to cross the planet to take part in this procession. Literally immersed in this atmosphere, we park our mounts in the middle of hundreds of sisters and cousins ​​produced for the most part a hundred or so kilometers away. 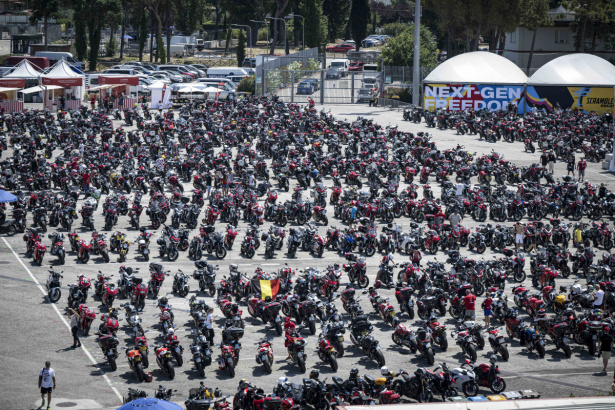 Competition remains the Leitmotif of the Italian firm, and you only have to see the number of sports series derived from the Superbikediscipline in which Ducati has always excelled.

In the same vein, the brand had the good idea to invite its MotoGP and Superbike riders to a race on 15 Panigale V4S and 6 Panigale V2 in special series. Autographed and already sold models!

The press conference was an opportunity for us to discuss with these prodigies, all happy to participate, but also with the big boss, Claudio Domenicali : “For me, the WDW is above all the chance to live our passion together, to exchange and have fun. Ducati makes motorcycles, but it’s first and foremost a brand of enthusiasts, and that’s what brings us all together here. »

Being able to approach the big boss of an international brand such as Ducati is not easy, but above all that is the strength of the WDW; friendliness. No one takes themselves seriously, everyone is there to have fun. 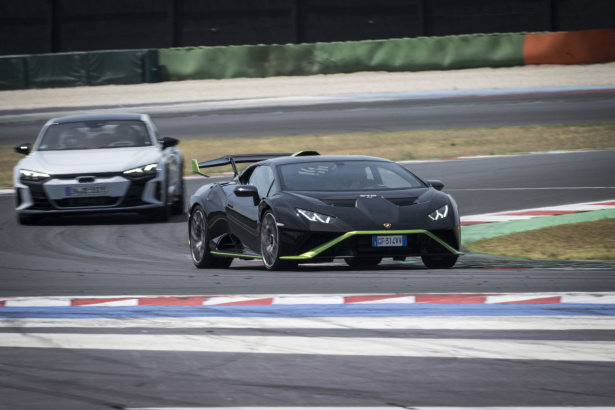 Proof of this is the great evening parade, which begins on the circuit and ends in the streets of the city, bringing together thousands of machines in a fiery atmospherewas opened by Claudio Domenicali himself, surrounded by the pilots and the board of the brand !

End of this parade, a party dedicated to the Scrambler, on the beach, hosted by DJ Benny Benassi. The next day, the day is punctuated by tests and baptisms on the track, on two and four wheels since Lamborghini and Audi are partners of the Italian brand.

Between two tests, “stunters” undermine production models. An off-road space is dedicated to the novelty of the moment; the Desert X, which we were able to test previously. But the highlight remains the Lenovo Race of Champions.

Jack Miller, Johann Zarco, Jorge Martin, Alvaro Bautista or encore Michael Ruben Rinaldi among others competed on the MotoGP circuit with a real desire to win, but it’s Pecco Bagnaia who knew how to pull out of the game.

As always, the atmosphere is spectacular and the full stands warmed up the pilots who did not hesitate to give their all at the finish. Note the cloud of smoke created by the burns of a certain Jack Miller on the pit straight! 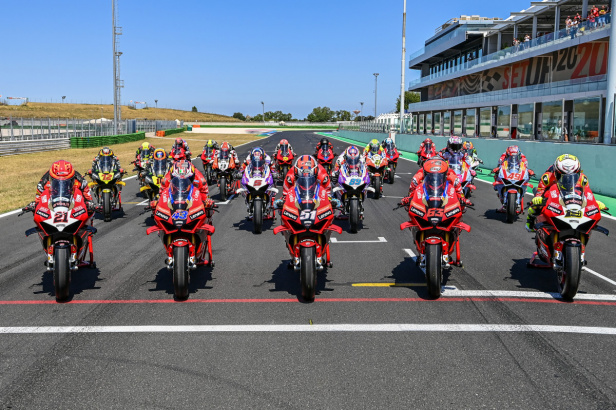 This same straight line will give way to another smoke in the evening, much more pleasant, that of the Rusty. This is a traditional barbecue during which visitors are simply served by the big boss, the staff and the managers of the different countries.

A rare and simply unique moment. An exceptional evening with the presence of representatives of the 235 clubs will close this Saturday. The next day the Word Ducati Week closes its doors at the end of the day.

We take advantage of this Sunday to return. Les 1,500 km avalés sur nos Multistrada V4 S give us the opportunity to think back to those magical moments marked with the seal of the Bologna firm. There is no doubt about our presence at the next edition, in 2024.

With its 1,158 cc V4 engine3 developing 170 ch and 10 500 million/minits rigid chassis, its efficient chassis with daunting braking and a suspension perfectly suited to the riding modes chosen, the Multistrada V4 S proved to be the ideal tool for our journey.

In imperial comfort, the beast was able to withstand the winding and very cool passes at altitude, the stifling heat of the valley and the 1,500 km of motorway swallowed in one gulp for the return.

Easy to handle despite a multitude of electronic aids, the Multi has been able to be docile but also furious if necessary without ever failing.

Ducati MotoE: soon on the track, but not on the road…

Triumph TE-1: the electric motorcycle, between promise and demonstration

Porsche: a future 7-seater electric SUV that will be “very little Porsche”

30 years ago, Renault unveiled the first generation of its Twingo. The opportunity to wonder about its success... and what...

VIDEO – This Mercedes narrowly avoids a car going the wrong way on the highway!

It didn't go far for the driver of this Mercedes! While driving quietly in the left lane, he came face...

A few days ago, the player of Cleveland Browns, Myles Garett, was involved in a spectacular road accident. At the...

The Lucid Air is more dark with the Stealth Look Package