The (secret) history of the Lada Niva – AUTO HISTORY

To give birth to the Niva, it was first necessary a palace revolution. In October 1964, the angry Nikita Khrouchtchev was removed from power. He was replaced at the head of the USSR by a tandem. The caricaturists were amused by the bushy eyebrows of Leonid Brejnev. The kremlinologues listened the reforming voice of Alexis Kosygin. The latter intended to transform the Soviet economy: Comrades! Building communism and improving people’s quality of life are inseparable » he hammered in front of thousands of delegates, on the occasion of the XXIII congress of the single party, in the spring of 1966. Less than fifteen years later Stalin’s death, concern for the well-being of the 220 million Soviets still seemed incongruous. With this speech, Kosygin mainly shifted the focus from the planning of heavy industry to everyday consumer goods. And one of the keys was the automobile. Existing state enterprises painstakingly assembled 200,000 cars per year. In other words, peanuts.

To accelerate the creation of a local industry, Kosygin counted… on the West. From 1964, Soviet delegations went to Renault, Volkswagen or Fiat to find a technological partner. We dissected the models, and we spoke at length with the politicians. Italy played the card of the best lobbying. Rome already had its entrances to Moscow: in 1961 the oil company Agip was the first Western company to buy Soviet crude. Fiat also offered its engineers, technicians, parts, machine tools and plans for its 124 family saloon. direction to Billancourt (1).

A few weeks after Kosygin’s announcements, the daily Pravda announced the signing of a historic agreement between the USSR and Italy. Transalpine engineers settled 1,000 kilometers from Moscow, on the banks of the Volga, in order to pass on their knowledge to their Russian colleagues. For four years, we built there a brand new factory town. Soviet workers were lured by the promise of state-of-the-art apartments. Name of the city ? Togliattiin homage to first secretary of the Italian communist party (PCI), who died in the USSR a few years earlier. And the production tool? VAZ (or Volga Automobile Plant). A 4 kilometer long monster, equipped with its own foundry, capable of producing 600,000 cars per year in the long term. Estimated cost : 3 billion euros today.

The CIA was closely monitoring the project. In Rome, at the end of 1966, an agent met Vittorio Valetta, big boss of Fiat. The Americans viewed the deal favorably, believing that it would reduce military spending by the USSR and cool tensions between the two superpowers. In a document now declassified (2), the CIA even questioned the advisability of providing support in dollars to the adversary… The report at the same time moderated the scope of the project. VAZ will not immediately produce a 2CV or a Beetle : « the Soviet program is primarily intended to provide automobiles for the bureaucratic elites, not for the average citizen “. The borrowing for personal purposes of vans and trucks by apparatchiks premises had become a national sport, harming industrial activity. The American note also insisted on the weakness of the road infrastructure: “ Today we count eight gas stations and eight garages in Moscow […] three stations and a garage in Leningrad […] A fifth of Soviet cars are out of service, awaiting repair due to lack of parts “. And only 9% of roads were paved…

Factors that explain the two-step “product plan” validated by Alexandre Tarasov, Minister of the Automotive Industry. First, the VAZ plant focused on its Russian version of the Fiat 124named 2101. In charge of equipping the important members of the party, it was distributed in the USSR under the Jigouli brand. The solid sedan even began to find outlets in capitalist Europe, thanks to its price lower than that practiced by the manufacturer of Turin. Problem raised by importers: the name Jigouli sounded too much like “gigolo” in French or in English. Outside its homeland, VAZ products adopted in 1973 the Lada brand. This is the name of a traditional small boat sailing on the Volga.

Second project on the desk of Minister Tarasov: a “private”, “comfortable” and “all-terrain” car for rural areas. The man demanded prototypes from three builders. Izhmash (known as the maker of the “Kalashnikov”), Moskvitch and VAZ each worked independently from 1971, in order to fulfill the objectives of the next plan quinquennal. In the Togliatti design office, the Soviet engineers were phosphorizing. Their names, Vladimir Solovyev or Piotr Proussov. Unequal materials, hazardous supplies, sometimes lost labor… These men were already experienced in the D-system. 65% of the parts of the VAZ 2101 were already made in USSR.

A first prototype nicknamed crocodile comes into being. But it was considered too rustic by the ministry, due to the absence of doors and a canvas roof. Over the next few years, six test vehicles were produced. They draw little by little the features of the future Niva: 3-door body, reduced size, permanent 4-wheel drive, self-supporting body. Under the eyes of officials, the machines are tested in the mountains of the Republic of Tajikistan. These gentlemen were convinced: it was VAZ that was appointed to design and then produce the rural car imagined by the ministry. In an account of the birth of the Niva (1), the historian Jean-Louis Loubet emphasizes the modernism of Solovyev and Proussov’s proposal: ” The technical choices are relevant: permanent four-wheel drive, two axles connected to a central transfer box with differential and lever lock, enough to cross 58% slopes, 50 cm fords or walls of snow. But the 2121 project does not forget the civilized life: it drives like an ordinary car, parks in a pocket handkerchief thanks to its wasp waist, 10 cm less than a Renault 6 but capable of accommodating five adults and some luggage “. On the design side, the Italian breath was still felt in Togliatti: the profile and the bonnet, designed by Valeryi Semushkin, evoked the Fiat 127. The last transalpine engineers and workers only left the site in 1975 (3). If the 1.6-litre inline-4 from the Jiguli 2106 did indeed have Turinese ancestry, the concept, the 4×4 system, the bodywork or the front suspensions were “homemade”. The Soviets had given birth to their own mass-produced car.

A pre-production copy of the Niva (“wheat field”) was officially unveiled in February 1976 on the occasion of the XXV Congress of the Communist Party of the Soviet Union, high mass of the regime. The chief engineer, Piotr Proussov was in the Kremlin: ” Brezhnev got behind the wheel and drove off, followed by his escort, told the boss of the design office of VAZ in an interview given to the Russian magazine resultsa few years before his death in 2017. The general secretary liked to drive fast ». Licensed collector of Western cars (4), the gensec also liked to give gifts: The fashion was to give Niva to foreign leaders. Fidel Casto, the Chinese, the Indians… “, explained with satisfaction the father of the 4×4. Launched in the Soviet Union on April 5, 1977, the Niva was immediately the subject of intense propaganda. Central Television filmed the Togliatti workers while the magazine Za Rulem (“At the wheel”) organized a rally in the Karakum desert. We ignored the too small trunk, the discomfort in the rear seats and the endless waiting times. 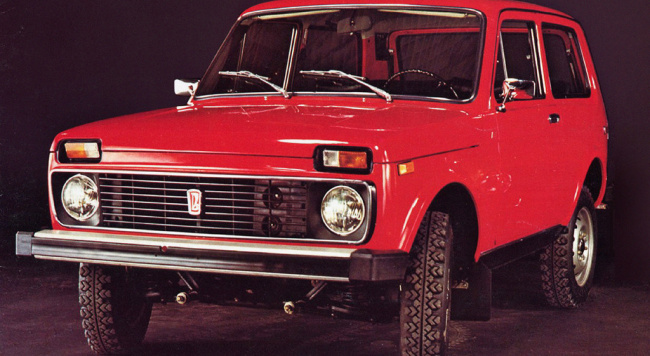 Because very quickly it is the export which was privileged, representing up to 70% of the volumes. The 4×4 quickly had admirers beyond the Iron Curtain… especially thanks to the snow. the 1is January 1979, France was paralyzed by the blizzard; on three-quarters of the territory, only 4×4s managed to make their way between the snowdrifts. At the same time, television broadcast images of the very first Paris-Dakar. Five Niva entered by private competitors faced the Algerian desert. The Lada importer in our market, Jacques Poch, rubbed his hands… just like the Soviets. Trains loaded with Ladas bound for Germany or France returned to the USSR with valuable Western currencies. ” It was madness in EuropeProussov explained, the customs officers did not even have time to stamp the exit documents “. In the name of these well-understood interests, the inhabitants of the Soviet countryside could wait.

During this time, the CIA was still watching. « The growing abilities of Soviet industry to design and produce modern vehicles are reflected in the Nivawrote Robert Frazer, veteran of Detroit mandated by the agency to better understand what was going on in the camp opposite. This vehicle, which satisfies the needs of the Soviets for a comfortable mode of transport in rural areas, has great export potential. It appears to have been developed without foreign assistance and assembled with domestic equipment “. You could almost feel a hint of jealousy.

(4) Renault, Rolls-Royce, Lincoln… On board the latter, he terrified American President Richard Nixon by his driving.

Deaths on the Nationale 7: the worrying Saint-Aubin affair

Who really invented the highway?

Dagen-H: the day Sweden started driving on the right

The secret history of the Renault Clio V6

How was the automobile in East Germany?

The tragic (and somewhat comical) story of Anton S. and his Wartburg