Is Mazda working on an electric coupe similar to the MX-5?

During a presentation on its electric strategy by 2030, Mazda unveiled a Vision Study concept evoking a coupe close to the current MX-5.

On the occasion of the presentation of the evolution of its electric strategy by 2030, Mazda has chosen to offer a small gift to those who had watched the 36 minutes of video by unveiling a new concept of small coupe. This one does not even appear in the official press release of the mark, except for two virtual shots which allow to discover the silhouette.

With its long bonnet and gaping mouth, as well as its short rear and wheels on all four corners, this white show car quickly evokes the current generation of Mazda MX-5, codenamed ND. However, it stands out with surprisingly cut scissor doors and a very rounded fixed roof, with no visible demarcation proving that it is a convertible. Admittedly, the current MX-5 also exists as a “coupé” with its RF variant (for Retractable Fastback), but it is best known and appreciated for its ST version (for Soft Top) with a manually-opening canvas roof.

This concept, very soberly called Vision Study, could therefore be a first clue to the future of the Miata. The fifth generation of the roadster, expected in 2024, will retain its heat engine according to Joachim Kunz, director of development for the brand. But the roadster could yield to the sirens of hybridization to continue to thrill enthusiasts. For the moment, no information is given by the brand on this concept, not even its engine.

However, it could also be something else. This concept is revealed as part of a strategic presentation on the electrification of Mazda, which is being done in small steps. Today, the brand markets only one 100% electric model, the MX-30, with very limited autonomy. This Vision Study concept can therefore be seen as a simple exercise in style, demonstrating the brand’s desire to strengthen its electric range with new models, but without revealing a specific one.

Mazda has also announced an investment of more than 10 billion euros to continue on the path of electrification. The manufacturer has also confirmed that it is forging partnerships with companies specializing in the design of electric motors and batteries. 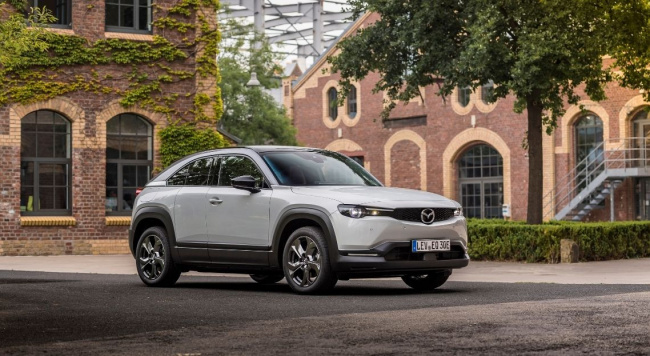 Finally, the latest innovation announced: the upcoming arrival of an MX-30 with a range extender, in the form of a rotary heat engine. This additional version should be presented at the Brussels show next January.

This Friday, December 2, the court of Colmar (Haut-Rhin) delivered its verdict in a case of breach of trust. The...

To help improve the climate, Google Maps now offers more economical routes. But are they really? We do the test....

The Ocean SUV is produced by Magna in Austria, and the Pear will be produced in the United States by...

Are you hesitating to order a Model Y with this new color? You can now see what it looks like...