To help improve the climate, Google Maps now offers more economical routes. But are they really? We do the test.

Google Maps has always presented criteria for selecting the route that best suits your needs. In general, users could choose between the shortest distance courses, or the fastest ones. From now on, navigation is evolving and has been offering more economical routes since the beginning of September.

Marked by a green leaf, these routes promise to save energy to reach a destination. And this regardless of the vehicle’s engine, since it is possible to enter the type of fuel used (petrol or diesel) or the electrified technology (hybrid or electric). Depending on the information provided, the mechanical specificities, the environment, but also the traffic in real time, the system will then propose the most fuel-efficient route, and therefore in terms of CO2 emissions. This is the pride of Google, which indicates that the system has already saved more than 500,000 tons of greenhouse gases since its launch in North America and Germany.

Google Maps Eco-routes: how does it work?

To achieve this, the device uses its own databases, acquired since the launch of the application, as well as those of the National Renewable Energy Laboratory of the US Department of Energy (NREL, to make it simpler), with which Google recorded the consumption of a panel of vehicles. It is precisely le service Route Energy Prediction Model (RouteE) which was used by both entities. On our side of the globe, there are also data from the European Environment Agency.

In detail, it is la technologie Future Automotive Systems Technlogy Simulator (FASTSim) from NREL which is at the heart of the system. A solution that makes it possible to estimate fuel and energy consumption for several types of vehicles. The model is then integrated with RouteE, which targets the most economical route. Finally, it is Google that brings its expertise in route planning and calculation of estimated time of arrival (Estimated Time Arrival), relying in particular on real-time analysis of the state of traffic. , the real strength of this navigation.

If the arrival time is similar, the algorithm automatically programs the most economical route. Conversely, it lets the user choose between energy savings or travel time. But according to the Mountain View company, however, the system eliminates trips with too large a detour or with too low gains. However, the defined thresholds have not been specified, neither in relative nor in absolute terms.

During our numerous theoretical simulations for everyday journeys, the system offered on average longer economic journeys of 5 to 10 minutes, with gains of 10% for an electric car. It is sometimes shorter, and sometimes longer. As is the case with a route from Lyon to Nice: the eco route offers a 25% energy saving, against an extension of 2 h 10 (6 h 50 by the secondary network against 4 h 40 by the freeway without traffic jams). Also, the earnings can sometimes plummet and only represent a saving of 4% if the traffic becomes denser. This is one of the lowest spreads we have seen.

If the invisible part of the iceberg seems like science fiction for the majority of drivers (including us), the system offered by Google is exemplary clarity. After having entered point A and point B, the user can see at a glance the distance, travel time and savings made with the proposed routes. Differences announced in relative rather than absolute value for more consistency between car models, which it is not possible to select with precision. 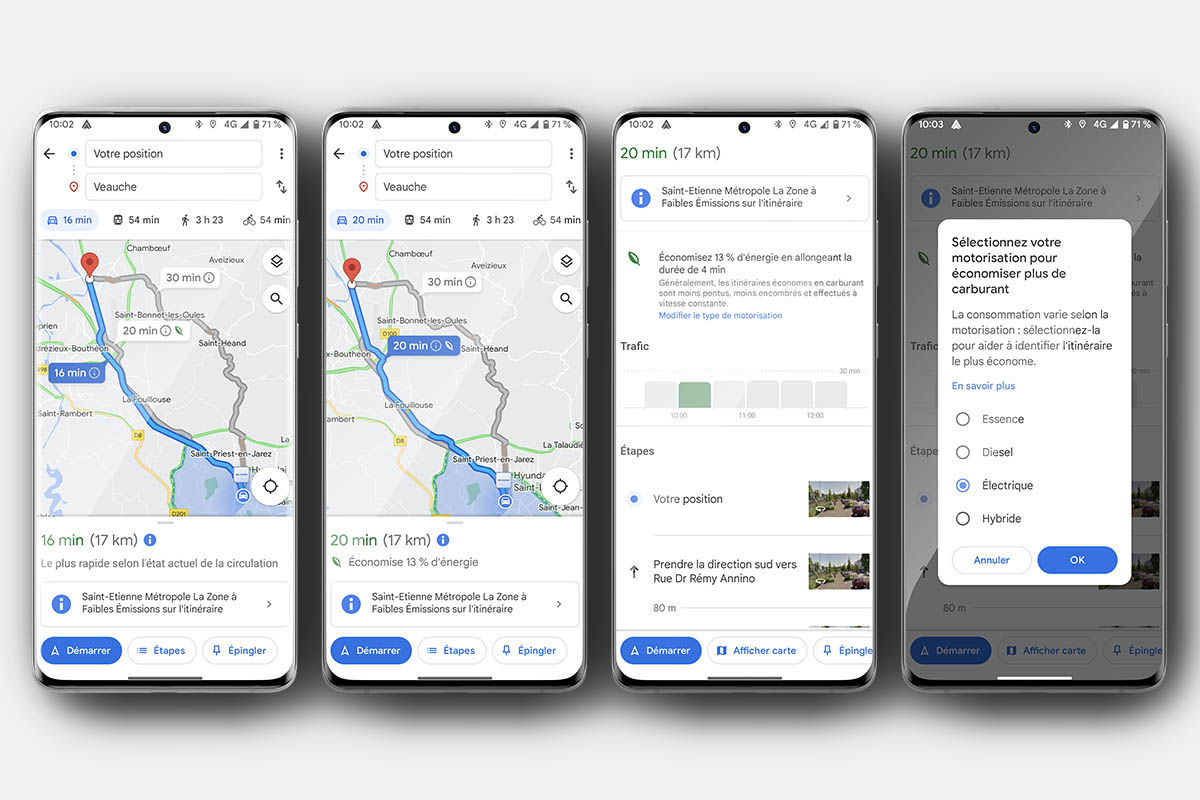 Are the estimated gains reliable on a daily basis?

For these tests, we took the wheel of a Skoda Enyaq iV 80 (to be found soon in Supertest). For each route, the air conditioning was set to the manual position in order to avoid variations that could affect consumption, as Google does not take temperatures into account in its calculations. To better highlight the savings that can be made, we conducted these tests without traffic, and only using the automatic cruise control when reading the signs of this electric SUV.

Our first test broadly follows the codes of the daily journey of the majority of French people, with a round trip of just under 35 km in total between the center of a large city and the residential suburbs. According to Google Maps, this typical route without economic considerations is spread over 17 km for a duration of 16 minutes, and it is therefore the motorway portion that is preferred here. Unlike its ecological alternative, which only uses the expressways to avoid an urban section, thus unnecessarily lengthening the driving time: according to our observations, 5 minutes more would be necessary by completely avoiding the expressways. This is undoubtedly one of the limits that the Google Maps system does not wish to cross. However, the savings are palpable for this second route of 17 km with a total duration of 20 minutes. In a sense, it saves 13% of electrical energy. In the other, the 7% difference is lower due to the less favorable topography.

Read also
National road vs motorway: which route to choose to go on vacation?

Needless to say in advance that we have always observed a time difference quite close to the forecast, with a difference of exactly 3 minutes. But the real good surprise comes when it comes time to do the accounts in terms of consumption. In the outward direction, the counter of the Skoda Enyaq iV 80 thus presented a value of 14.4 kWh/100 km, against 11.2 kWh/100 km on the greener route, or 22.2% difference. On the way back, we recorded an average of 22.4 kWh/100 km compared to 20.4 kWh/100 km, which translates into an 8.93% saving. 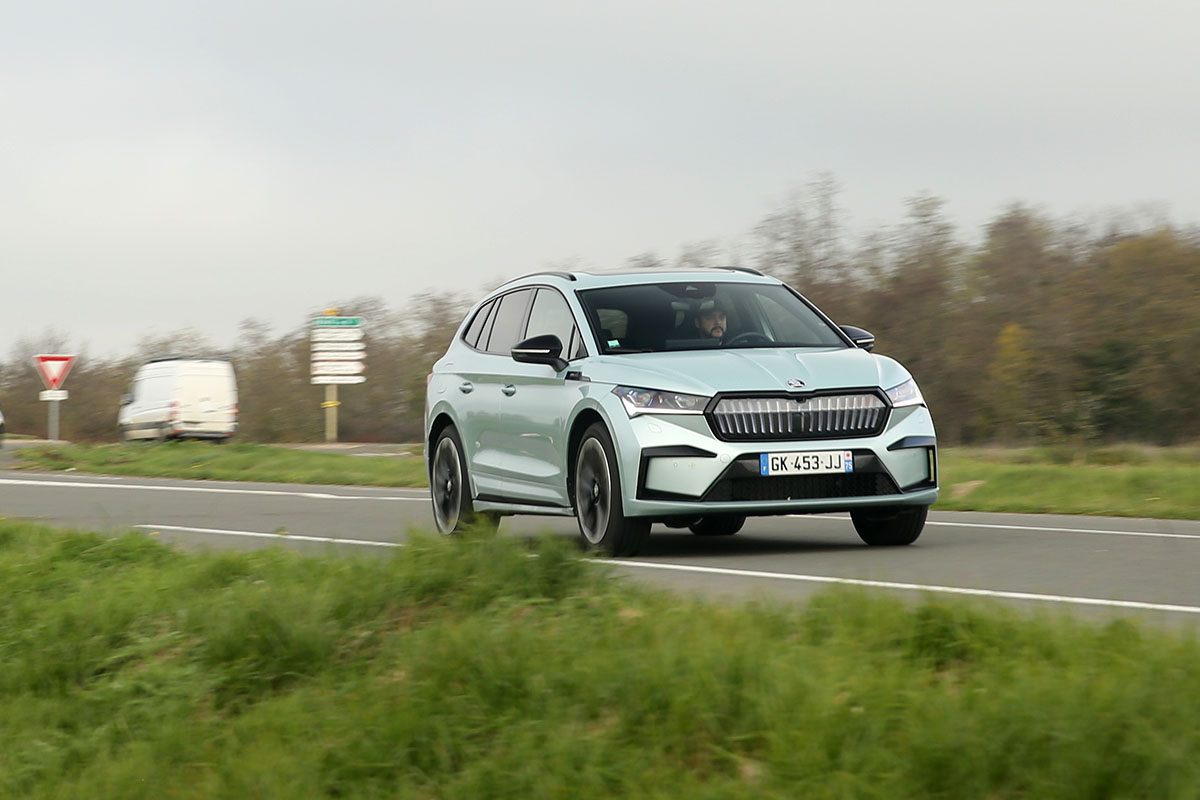 And for longer or more demanding journeys?

Therefore, Google Maps seems to keep its promises quite well. We have therefore decided to push the exercise a little further, with a destination that requires almost the same time regardless of the type of route. On the one hand, the choice of ease and comfort with 74 km of expressways and motorways. On the other side, a 22 km shortcut through demanding reliefs (52 km against 74 km), but with a negative final elevation which would make it possible to achieve, at the time of the test, 43% savings at the time of the test, while likewise ! Despite the ecological benefits, it should be noted that the application then selected the motorway route by default, which is only one minute faster.

While there is no doubt that this route via the secondary network proved to be much more favorable than the motorway alternative, the consumption gap was more generous: we recorded an average of 11.9 kWh/ 100 km by the reliefs against 22.6 kWh / 100 km. A saving of 47.35%, which goes beyond the predictions of the application. 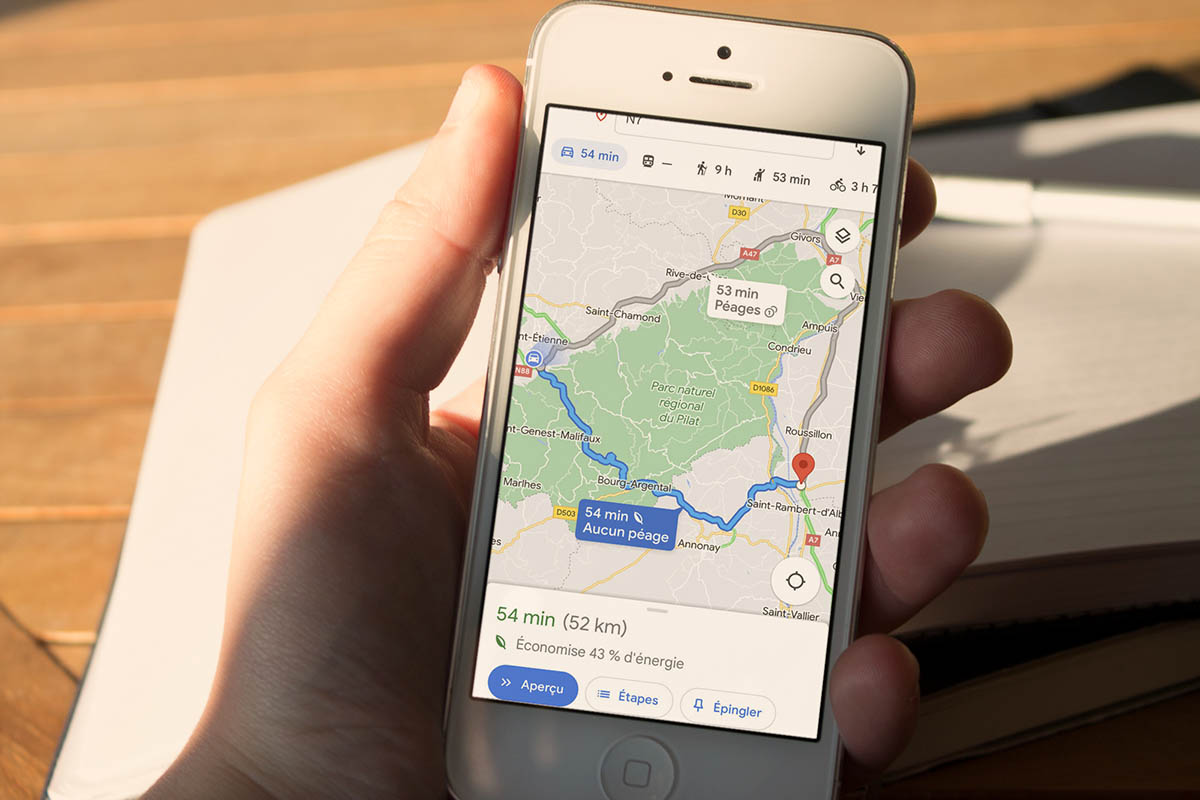 However, remember that Google Maps promises energy savings. And not rates of change between average consumption. A nuance difficult to calculate in the absence of perfectly calibrated and precise measuring tools. On the other hand, by applying a rough cross product to our consumption to obtain a volume of energy consumed, the rates are substantially similar, if not much more attractive: on the first run, the average energy saving is 10, 3% round trip (against 10% according to Google’s projections), while it stood at 64.2% on the last route. Everyone will make their own calculations according to their needs, but at the end of the month, this can represent significant savings. Especially with cars that have to go to the pump.

If the initial idea focuses on the reduction of CO2 emissions, and therefore on fuel savings, the system developed by Google Maps also extends to electric cars. At the end of these three tests, there is no doubt that the device knows how to be particularly predictive and well studied, whether for daily journeys or other more demanding routes. Therefore, we imagine it quite close to reality when it anticipates 16% savings on a Paris-Nice, but it will nevertheless be necessary to plan an additional 4 hours via the Nationale 7 and the Napoleon road, rather than by Highway. A price to pay that is probably more acceptable than during our road trip in a Renault Megane e-Tech this summer: we had to spend 8:40 hours more behind the wheel to take advantage of lower average fuel consumption of around 32.14 %. An unprofitable exercise for Google Maps which therefore does not offer the historical route.

It is therefore up to each driver to make his own choice according to his needs. In the meantime, the device will continue to learn and refine its proposals thanks to the Machine Learning dear to American business. Also, it would be nice to take advantage of better ergonomics: it is not yet possible to choose an eco route from a computer to send it to your smartphone, while the Mirror Link system does not allow you to view the savings. energy by planning a route from the car screen. In addition, it is not entirely certain that Google will integrate a list of car models in the future in order to perfect its forecasts. To best anticipate electricity consumption, it will be necessary to continue to use independent route planners such as ABRP or Chargemap.