On the occasion of the Kenshiki Forum, a mini-motor show for Toyota and Lexus in Belgium, we were able to discover in detail the fifth generation of the Toyota Prius.

Presented in mid-November in Japan and at the Los Angeles Motor Show (United States), the fifth-generation Toyota Prius had not yet landed in Europe. It is now done, on the occasion of the Kenshiki Forum.

A sort of mini-motor show organized by Toyota and Lexus, the event allows the Japanese group to present its future models and give an indication of its strategy, particularly from the point of view of electrification. For this fourth edition, held in Brussels (Belgium) at the end of November, the program was packed: first European presentation of the Toyota bZ Compact SUV Concept and Prius of the fifth generation, additional details on the electric supercar Lexus Electrified Sport, world premiere the Toyota C-HR Prologue… Let’s focus here on Toyota’s hybrid sedan, which we are discovering “in real life” for the first time.

A much more attractive design

Launched in 1997, the Toyota Prius celebrates its 25th anniversary with a much more desirable new generation. Always defined by its divisive style, the sedan here is much wiser and in tune with the times. It offers a more modern and fluid style, with a shape reminiscent of the second generation in particular. The roof is 5 cm lower and its pavilion is much more receding, like a coupe. The length is reduced by 4.6 cm, bringing it to 4.60 m. The wheelbase is extended by 5 cm compared to the previous generation, while the width increases by 2 cm.

At the front, the Prius 5 has a “Hammerhead” front end that will become common on the rest of the range. An imposing gray protective ski appears at the bottom of the shield, completed by black lacquered inserts. The wheel surrounds are also in black lacquer, as are the mirror caps. The rear has a large LED light strip, placed on a lacquered black insert once again.

Uneven quality on board

Inside, we find the world of Toyota, even if there are a few changes. For example, the dashboard has a large central 12.3-inch touch screen for the multimedia system, supplemented by significant physical climate controls. The fairly large steering wheel is studded with buttons for managing the radio, the cruise control or the display of the digital counters. These, placed high up like Peugeot i-Cockpit on a 7-inch slab, suffer from the same defect as with the Lion: reduced visibility depending on the driving position and the angle of view.

The overall quality of the cabin is subdued. The top of the dashboard is slightly foamed and rather pleasing to the eye, but a little less to the touch. It incorporates an insert in the form of small tiles in relief. On the other hand, there are a lot of unrewarding hard plastics on the doors and the center console. It features a classic Toyota gear lever, and several buttons for driving modes or the Auto-Hold function near the electric handbrake. An EV button used to force the use of the electric motor and a battery backup mode are also present. 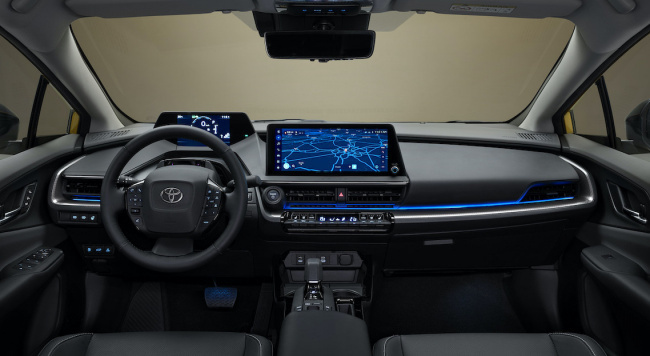 The rear seats are very correct despite the slightly reduced size (-5cm) thanks to the extended wheelbase. On the other hand, pay attention to large sizes: the very plunging roof and the low line of the car make you quickly touch the headlining, even below 1m80. On the other hand, the backrest is well inclined and the foot cellars are roomy. The central seat seems relatively uncomfortable, with a large reinforcement at the bottom of the backrest for the armrest which fits into the back and a very hard and more vertical backrest. Fortunately, the easement tunnel is very small. The trunk is not huge, with a fairly high threshold and a false bottom location taken up by an element to store the charging cable. Toyota does not give the exact capacity of the hold.

Plug-in hybrid only in Europe

Under the hood, the new Prius stays true to the hybrid. However, it will only be available as a plug-in hybrid in Europe. On other markets, it remains accessible in hybrid without connection. Toyota explains this choice by an already comprehensive range of simple hybrid models: Corolla, Corolla Cross, C-HR, Yaris to a lesser extent… The manufacturer also wants to make the Prius its new flagship for plug-in hybrid technology.

It is indeed a new generation of the Toyota PHEV, with a 2.0 four-cylinder 152 hp associated with a 163 hp electric motor, for a cumulative power of 223 hp. A power much higher than that of the old generation of Prius PHEV, which offered only 122 hp. The 13.6 kWh battery would offer approximately 69 km of autonomy according to Toyota, the value being still in the process of approval. The charging socket is located at the rear right. Thanks to a solar roof (optional), the range can be extended by a few kilometres. Toyota claims it can generate 8 km of electric range every day, or fully charge the battery by being parked for a few days.