Despite its 15-year career, the Nissan GT-R refuses to give up its place and receives a slight restyling. Unveiled at the Tokyo show, it will unfortunately not be available in Europe.

Launched in 2007, the R35 generation Nissan GT-R left the European market in 2022 due to ever more stringent emission and noise standards. However, his career continues in other markets, despite his canonical age. To give you a little point of reference, the Japanese sports car was marketed 15 years ago, at the same time as the very first Apple iPhone or the Playstation 3 in Europe…

The GT-R, also nicknamed Godzilla, is still sold in its native land, in Japan. On the occasion of the Tokyo Auto Salon, the manufacturer therefore unveils a relatively light restyling for its coupe. This stylistic update brings it even closer to its predecessor, the mythical Skyline GT-R R34. Squarer grille, new shield incorporating small daytime running lights with staggered hexagons and a horizontal bar in body color rather than the black lacquered “mouth”, reworked rear diffuser…

Two special editions in the catalog

The Japanese GT-R receives in its market two special editions, the Premium edition T-Spec and the Nismo Special edition. The latter receives high-precision engine parts (piston rings, connecting rods, crankshaft) with particularly careful weight balance, as well as an exclusive carbon engine cover fitted with air intakes. On board, the Nismo also receives exclusive Recaro bucket seats, equipped with a carbon backrest. Finally, the fin is modified on the Nismo with a gooseneck attachment. The GT-R Premium edition T-spec meanwhile comes with a specially tuned suspension and carbon disc brakes.

Engine side, little evolution on the other hand. It is still the twin-turbo V6 with 3.8 displacement, which still develops 575 hp in the base version of the GT-R and 600 hp for the sporty Nismo variant. The torque increases to 637 Nm for the classic version and 652 Nm for the Nismo. 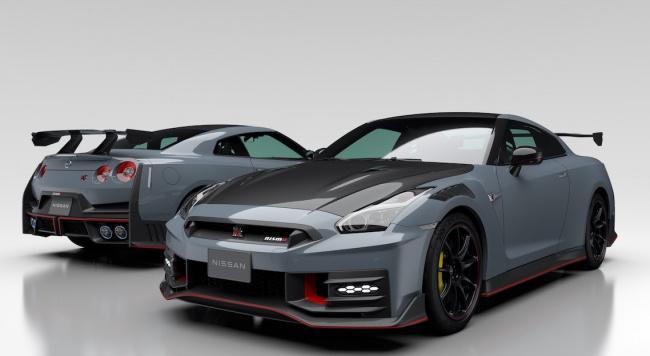 No marketing in France

The GT-R will go on sale in Japan in the spring, and in other markets outside Europe. It will be shortly followed by the GT-R Nismo in the summer. On the other hand, France should not be entitled to either of them. Should we hope for the return of the supercar in a hybrid or electric form in the coming years? The future will tell…