At the very top of the ex-PSA pyramid, DS Automobiles has plenty of time to inaugurate the new electric powertrain with the DS 3 e-Tense.

The race towards total electrification is not new within Stellantis ex-PSA. It was in 2019 that the French group began to realize its virtuous ambitions by unveiling the DS 3 Crossback e-Tense. It then inaugurated the e-CMP platform and the powertrain consisting of a 46 kWh battery (useful capacity) and a 136 hp motor, shared with all the group’s electric vehicles (Peugeot e-208, Opel Mokka- e, Citroën ëC4, …). But the mechanical tandem has never been a model of efficiency, especially on the highway. Grievances properly fixed with a recent technical update. But that’s not really enough to continue on the road to electrification, and Stellantis lifts the veil on a new powertrain that pushes the potentiometers even further.

Since history is only an eternal beginning, it is DS Automobiles that is responsible for putting the small dishes in the big ones. Or rather the opposite, since the new battery takes place only within the restyled DS 3. The size is therefore similar (a length of 4.12 m) and only trained eyes will probably be able to appreciate the slight blush of the crossover, which comes with a barely retouched look, a sharper mouth and two ramps. LEDs, standard at all levels, mimicking those of the DS 7 e-Tense.

The set is more elegant, more mature, but not only serves to play the starlets on the Champs Elysées: these alterations also serve the aerodynamics, with an improvement of 7.6% of the SCx. If the value is abstract for the majority of mortals, the gains would be significant according to the manufacturer, the aero participating up to 10% in the gains in terms of autonomy.

But for that, it will be necessary to be reasonable with the options and to select certain rims of 17” or 18”, the only two to benefit from a plate lowered by 10 mm due to their smaller size. And to obtain the maximum autonomy, it will be necessary more precisely to choose the Toulouse rims, profiled, symmetrical (it should be noted) and narrower with 195/55R18 tires against 215/55R18 with the less favorable rims. In short, a small visible part of the iceberg, which hides most of the novelties present under the surface. 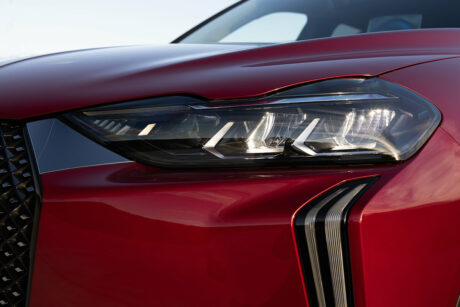 An unprecedented Made in France engine

In the floor takes place a 51 kWh battery (54 kWh gross), supplied by CATL but assembled in France. Like the Renault Zoé during its major restyling of 2019, the compartment, the supports under the chassis and the box are perfectly similar, and only the content changes. It is made up of 17 modules, containing 102 prismatic cells with NMC 811 chemistry, compared to NMC 622 previously (nickel content increased from 60 to 80%).

It powers a brand new electric machine specially developed for the French platform and retires the old Continental block. Responding to the code name M3, it was designed in partnership with eMotors and is manufactured, like the rest of the car, in France. This mechanism makes it possible to deliver a maximum power of 156 hp (115 kW) for an unchanged torque of 260 Nm (nominal power of 84 hp/62 kW). Its evolutions are numerous, whether to promote efficiency at the center of the specifications (multi-strand winding, six-pole technology), or reliability (one-piece housing without seals on the cooling circuit).

All these improvements therefore allow the DS 3 e-Tense (don’t call it Crossback anymore), to gain a maximum of 84 km of autonomy compared to the first version of the urban SUV. That’s a gain of just over 26% to stay in the pack. It should be noted in passing that the DS 3 retains the recent improvements and is automatically supplied with a heat pump coupled to a humidity sensor, a revised reduction gear ratio and A+ tires. But this last point depends on the size of the rims, since the Goodyear Efficient Grip Performance 2 mounted on our test model are in category B in terms of energy consumption… 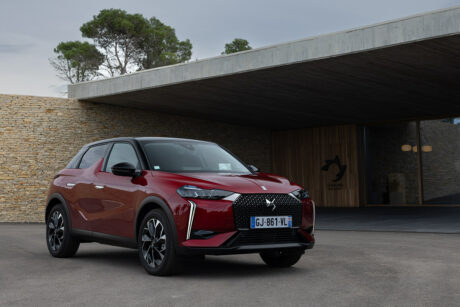 A new interface on board

Regulars of the model will not be out of place from the first laps of the DS 3 e-Tense. The SUV is substantially similar to the model we knew so far, except for minor cosmetic details. We therefore find there all that makes the salt of this model with, on the battery side, an original style and an appreciable manufacturing quality, despite the presence of hard plastics in the lower parts. On the front side, we also rediscover a spartan interior, seats that are not very suitable for large sizes, perfectible peripheral vision and complex ergonomics, including central touch keys that lack real haptic feedback. A detail.

But that’s where the generalist devil hides in vehicles with premium claims. This is what the “little” DS nevertheless cultivates, with real stylistic research from the Colors and Materials department. We will quickly close our eyes to the old head-up display in this universe, and rather appreciate the arrival of a new central touch screen, larger and brighter. It is based on the DS Iris System device inaugurated with the DS 4 and offers wireless smartphone connectivity. Only problem: it still does not have a route planner. It will be necessary to wait a little longer before seeing it arrive on a mobile application (to be sent to the navigation of the car then), before having a real system directly operational from the cabin. 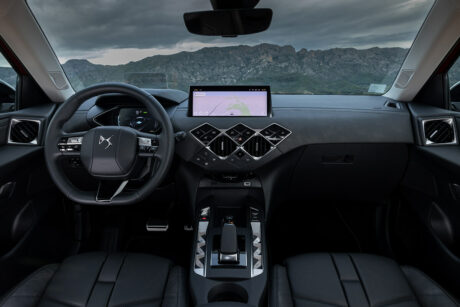 We rediscover on the road a particularly well soundproofed SUV which subtracts the occupants from the external environment in the city. This is less the case on the road or highway, where the aerodynamic noise around the pillars is combined with the loudest rolling noise generated by the not so specific tires. But this is where it proves to be the most comfortable with damping that is more flexible, unlike in town, where the rear axle hits hard on the speed bumps, even when approached at reasonable speeds.

At regulatory speeds, it’s difficult to give the new engine extra driving pleasure. As with the previous generation, the common engine will have different typings and maps depending on the manufacturer. At DS, it is softness that prevails and you have to press hard, even very hard on the kickdown notch to release the 156 hp. But nothing helps, the DS 3 prefers to pamper its passengers. Certainly, the gain of 1.1 s announced by DS on the 80-120 km / h is charming, and this thanks to only 25 kg more on the scale compared to the previous generation. But the time of 6.7 s recorded by us does not stick to the seat. A Peugeot e-208 with a less favorable weight/power ratio (1,455 kg for 136 hp) and also equipped with the new gear ratio which lengthens performance is capable of completing the exercise in 5.8 s at a level of equivalent load (80%). 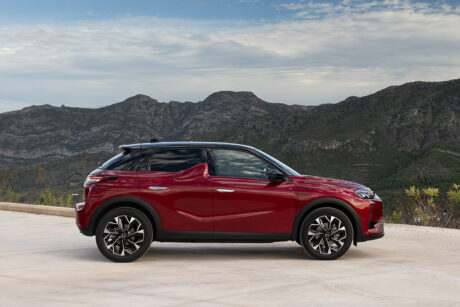 Still not comfortable on the highway

It therefore remains to mention the consumption, where this new kinematic chain must prove itself. Under a perfect average temperature of 20°C, we recorded a combined consumption of 16.9 kWh/100 km by varying the routes. This allows the new DS 3 e-Tense to present a total autonomy of 302 km in the real world. On the highway, on the other hand, consumption is still chilling. Although it has been considerably improved compared to the previous version, it is still high: at a fixed speed of 130 km/h measured in both directions, we recorded an average of 26.7 kWh/100 km, or 191 km of total autonomy! Certainly, the side wind is not unrelated to this result, but according to our estimates, we can at best consider, conditionally, a consumption of 25.5 kWh / 100 km. Which would hardly help the balance sheet with an average autonomy of 210 km on a motorway journey.

We will therefore have to wait to pass it on our Supertest test bench in order to measure more precisely the consumption and autonomy of this new version. In any event, this is still confined to urban or peri-urban use, and would taste little of motorway escapades: in the current state of our readings and estimates, it would be necessary to go through the recharge box every…140 150km away. Either a very short shooting window. It remains to know its behavior in front of fast charging stations, a test that we have not been able to perform for the moment. But despite an unchanged peak of 100 kW and increased capacity, this new battery could still fill up (10-80%) in 30 min thanks to a slight improvement in the average recharge power. Still in the charging chapter, the SUV comes automatically at all levels with the 11 kW on-board charger (0-100% in 5:45 a.m.) and an adequate Mode 3 32A three-phase cable. 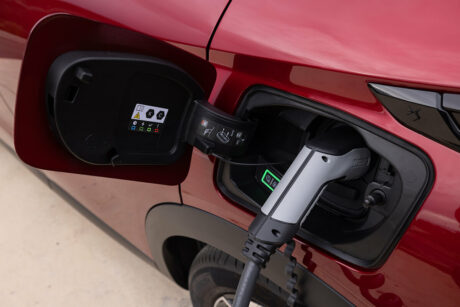 One of the lowest price/versatility ratios

The DS 3 e-Tense has the heavy task of inaugurating a brand new mechanical tandem that is particularly important for the manufacturer, but also for the whole of Stellantis. Designed and assembled in France, this traction chain will eventually equip all the group’s electric vehicles. However, if the case gains in elegance, the mechanical component evolves little. Good driving pleasure is always there, but it takes too much to feel the gains. What users do not do in the city, where the SUV feels most comfortable. Because on the highway, it still suffers from a particularly high consumption. The gains in autonomy are there, but this is not enough to catch up with the competition.

All that remains is for the DS 3 e-Tense to appeal to city dwellers looking for real refinement in a measured size. But with more pragmatic criteria, it is then difficult to digest the note: the SUV is displayed from 41,700 € and can climb up to 48,800 € in the high-end version. That’s more than the Smart #1, its closest competitor at the moment, which claims a check of €47,490 in the top-of-the-range Brabus version.