Honda: Hornet and Transalp, the stars of the year?

This year, Honda has decided to pamper the A2s. Three new motorcycles, two future stars and names steeped in history, just that! With its new 750 range, Honda will steamroll the motorcycle market to crush the competition.

By bringing back the Hornet name, Honda has great ambitions for its new roadster: to take the place of the MT-07, the best-selling A2 motorcycle in France. If the Hornet loses its iconic 4-cylinder, it gains an engine fun, which adopts the same architecture as the Yamaha, ie a parallel twin with a crankshaft set at 270°. It develops 91.7 hp at 9,500 rpm and 75 Nm of torque for a motorcycle that is playful, versatile and above all easy to handle, with its 190 kg fully fueled and its accessible ergonomics. How to learn while having fun.

TFT screen, 4 driving modes, inverted fork, the Hornet 750 is well equipped with an affordable price of €7,800

If you prefer adventure, you can turn to another icon: Transalp!

Same engine as the Hornet for this trail, but smoother grip response, a beefed-up frame, and a big 21-inch wheel with wire rims. With a contained weight of 208 kg fully fueled, the Transalp will titillate the Yamaha Ténéré 700 which has 18 hp and 7 Nm less torque. By offering more protection and the possibility of riding comfortably as a duo, the Transalp relies on versatility, long road trips with 390 km of autonomy announced, but a more limited off-road practice than with the Yamaha.

And in addition Honda announces a hyper competitive price. 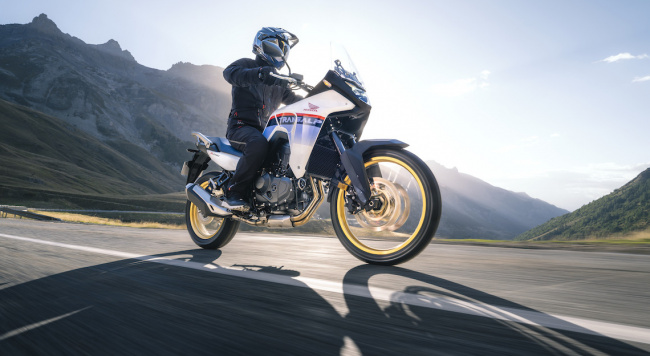 A false air of CMX Rebel 500 but a real novelty. This scrambler is presented as a small utility that will add a bit of joy to your daily life. 192 kg, an engine inherited from the CB 500 which displays 46.6 hp, 43.4 Nm of torque at 6,230 rpm and a revised character for more responsiveness.

Aficionados of the Indian brand have been waiting for a new “twin” for a long time. Here is the Super Meteor, a beautiful custom equipped with a parallel twin of 650cm3. Royal Enfield has decided to capitalize on the rather unexpected love of the Meteor 350cc version (1870 registrations in 2022).

The Super Meteor is the largest and most modern of the Royal Enfields: still this engine descended from BSA English twins, naturally A2 at 47hp, offering 52 Nm of torque at 5,650 rpm. With its 240kg and 1500mm wheelbase, it will be like resting on a rail, to cut the road “cool”.

It is also the most expensive of the Royal Enfields, finally, relative to the rest of the range: 7,990 euros It is available in 7 colors, 2 versions including an already well-equipped Tourer. 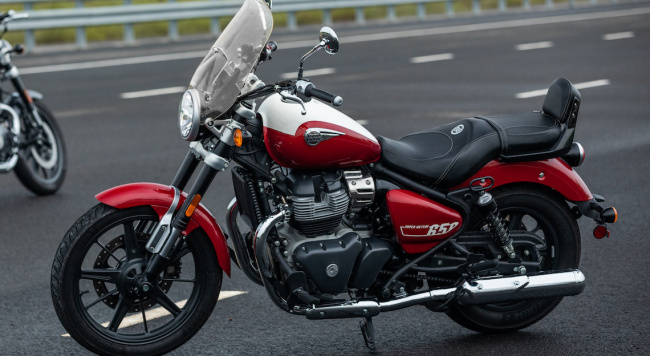 Buried alive by some, Suzuki is finally giving signs of life with the new 800 range around a parallel twin cylinder set at 270 degrees, like at Honda and Yamaha.

Suzuki arrives in the battle of the sporty and fun A2 roadster. A compact motorcycle that adopts the philosophy of “immediate pleasure”. With an assertive look and a technical sheet that makes you want: 776cm3, 83 bhp at 8,500 rpm, 78 Nm of torque and 202 kg on the scale with full tanks, an inverted KYB fork and braking with 4-piston radial calipers at the front.

Except that the competition is fierce and the Suzuki is already 10 kg overweight and 10 hp less than the new Hornet. We have to wait for the first runs to find out if it will make the difference in terms of dynamic behavior and engine character.

Last pitfall for Suzuki: the price. €8,899. It’s 1,000 euros more than the competition. But the quickshifter is standard to console you. 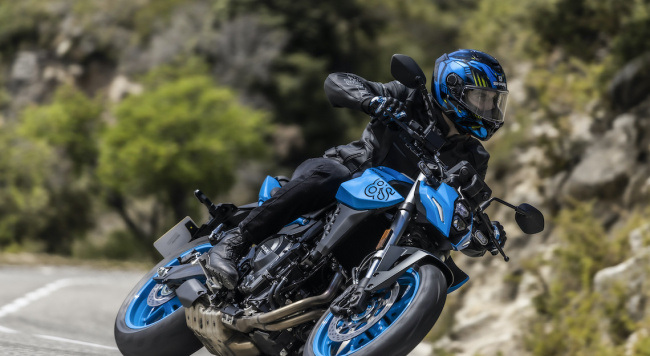 For its part, the trail seems to have a bright future. It builds on the reputation of the old V-Strom, whose name it keeps but loses the V-twin since it adopts the same engine as the GSX-8S.

The V-Strom modernizes its look with a big reference to the 80-90s and this duckbill reminiscent of the Big DR 800.

A versatile trail bike that’s more road-oriented than edgy off-road, despite its 21-inch front wheel. Long-travel adjustable Showa inverted fork (220mm), Nissin brakes, complete electronics with numerous assists (adjustable ABS and anti-skid), TFT screen, the V-Strom 800 DE should be a comfortable traveler, even as a duo. Its main defect is a weight of 230 kg.

Announced at 11,499 euros, it is a convincing proposition against the competition. 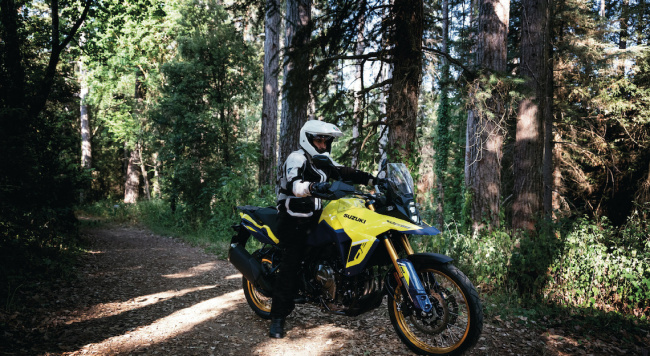 The iconic Scrambler gets a 3rd youth and turns into a fashion victim.

3 different versions, Icon, Full Throttle and Nighshift, which you can also change the color of the fairings almost at will with 9 kits available.

For the rest, Ducati has not made a revolution like on the Monster and retains a tubular trellis frame. The engine remains the 803 cc L-twin with Desmodromic distribution which passes the Euro 5 standard.

The Scrambler weighs 185kg in running order, produces 73bhp at 8,250rpm and 65Nm of torque at 7,000rpm. We will appreciate its inverted Kayaba fork (not adjustable), but we regret that the rear shock absorber is no longer offset, even if the performance gains at the expense of the look. Like any good Ducati, the braking is neat with the front Brembo 4-piston radial caliper. 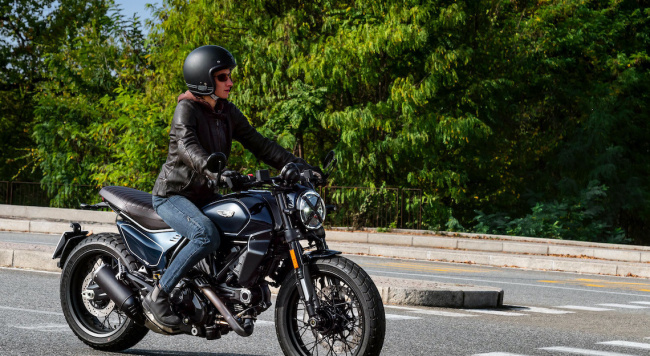 Fantic is a historic Italian brand, which navigates in the middle of all-terrain and small cars. Recently, Fantic and Yamaha have come together through various partnerships and Fantic bought Minarelli from the Japanese. The Caballero thus finds itself with a 73 hp CP2 engine, like the sparkling Yamaha MT-07. Who said hipsters can’t have fun? 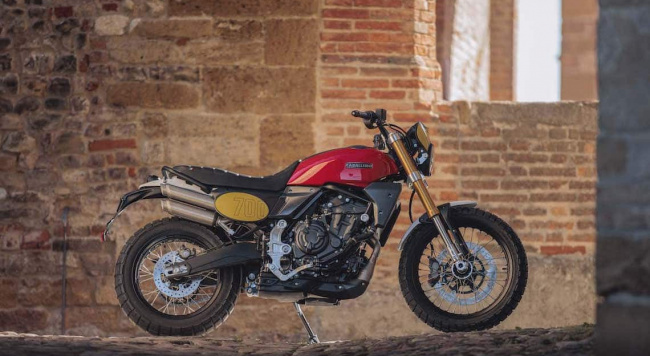 To offer products better suited to A2 permits, the Austrians are bringing out the 790 range 2 years after having made it disappear.

It’s the return of the 790 Duke roadster, nicknamed the “scalpel” for its sharp sportiness: 87 Nm of torque for 190 kg and Öhlins suspensions. Something to forget the clamping. 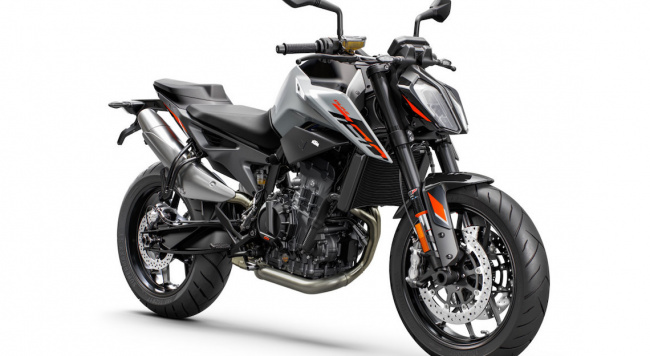 For adventurers, it’s the versatile 790 ADV trail, which will be produced in China by partner CF Moto.

The price is not known, but the future Dakar star in you should find a muscular alternative to the Ténéré 700. 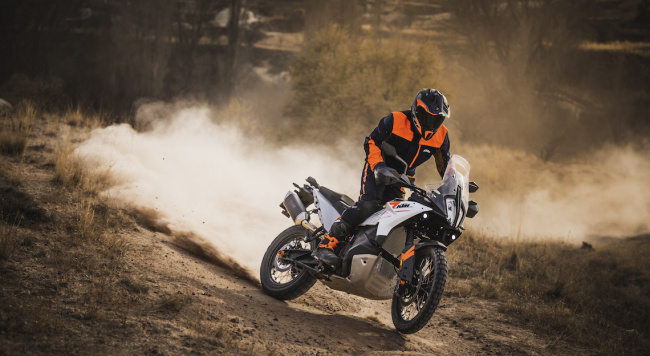 In 2023, MV Agusta promises us the return of the legendary Cagiva Elefant trails, which won the Dakar in the 90s.

For A2 permits, they will be able to acquire the Lucky Explorer 5.5, a 554 cm3 trail, naturally A2 at 47 hp. But it is actually a model produced by Quianjiang Motor, a Chinese manufacturer, and known in Europe under the Benelli TRK 502 badge. The 5.5 is therefore yet another variation, but with a premium-oriented technical sheet: Brembo braking, KYB inverted fork, TFT screen. With 220 kg dry, and 51 Nm of torque, it should still not be a thunderbolt. But its unique style and its advertised price of around 8,500 euros make it an intriguing choice. 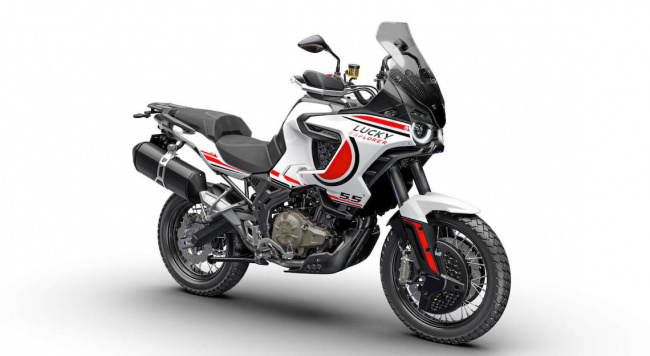 Kawasaki: waiting for the green revolution

This year should finally mark the beginning of the green revolution. Kawasaki promises that a small 125cc equivalent electric roadster will be released before the summer. We don’t know much about it, except that it will be equipped with a removable 3kWh battery. It will take over an existing chassis and equipment already at Kawasaki, which should make it possible to offer an affordable price. What if this was the real green revolution? 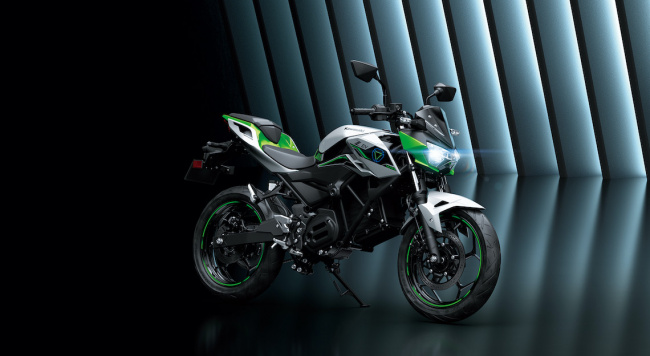 Harley-Davidson celebrates its centenary and offers A2 a version Special of his Nightster. Still the torque-packed, liquid-cooled, 89-hp Revolution Max 975T V-twin engine. This version offers you a passage seat, cast aluminum wheels, raised handlebars, a connected TFT screen, Brembo braking and cruise control. Above all, the Special stands out with solid colors that highlight the Harley-Davidson badges that pay homage to the brand’s past. 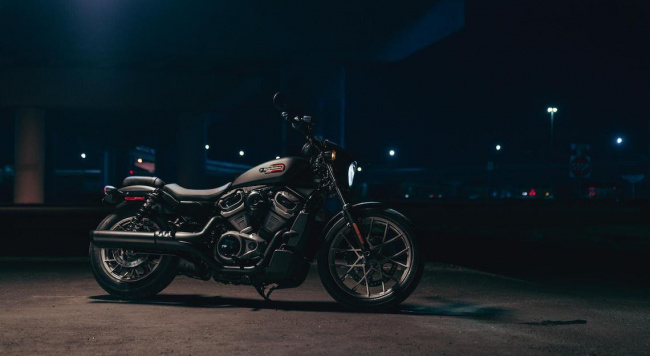 Peugeot Motocycles: the 2-wheeler made in France

We end with a scooter, the Peugeot Motocycles XP 400. An X-ADV made in France, equipped with the Metropolis PowerMotion 400 engine. A single cylinder that develops 36.7hp at 9,100 rpm for a torque of 38.1 Nm at 5,100 rpm. The XP 400 is well equipped to tackle the premium segment. It remains to know its price. 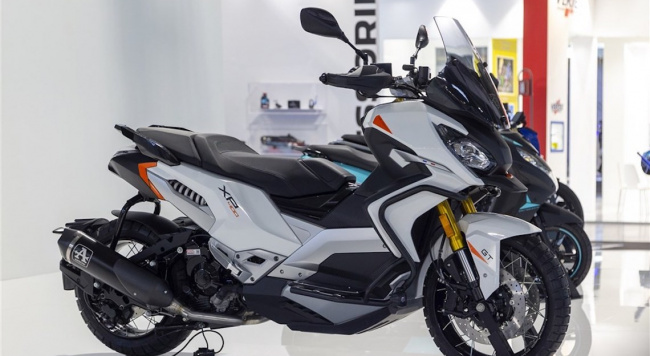