Mercedes CLA: slight restyling for the four-door coupé and the Shooting Brake After the Class A and B, it’s the turn of the CLA and CLA Shooting Brake to receive a mid-career update. The retouching is light, while the standard equipment takes a leap forward.

Last October, Mercedes presented its restyled A-Class and B-Class. Light touch-ups like a game of the seven differences, which can now be found on other models in the compact family: the CLA four-door coupé and the CLA Shooting Brake station wagon variant.

As on the Class A, the retouching is barely visible and focuses on the optics. Up front, the LED headlights are reworked with a new hook signature and are now standard. Ditto at the rear, where the light signature evolves subtly with a small wave as daytime running lights and more visible reversing lights. The rest is detail. Mercedes is adding new colors to the catalog including Hyper Blue, very bright and exclusive to CLA, three types of additional rims up to 19 inches and new upholstery. For example, we find the new Sage Gray interior of Class A and B, but also Bahia Brown (Artico synthetic leather and Microcut microfiber) or even “red/black pepper” upholstery.

On board, the CLA and CLA Shooting Brake change little. The steering wheel comes in Nappa leather as standard and can be heated on the AMG Line trim for the first time. Comfort seats are standard, and are made from recycled materials. Mercedes is integrating new decorative inserts in the dashboard in dark carbon, open-pore brown linden or brown microfiber (AMG Line only).

The two variants of the CLA are adorned with new standard equipment, such as the reversing camera, the high beam assistant, the USB pack (with illuminated sockets) or the double screen. As standard, the panels measure 7 inches for the counters and 10.25 inches for the multimedia system. Two 10.25-inch screens are also available as an option. The catalog also includes the Burmester audio system with Dolby Atmos and the Hey Mercedes voice assistant included in the latest generation MBUX multimedia system. The equipment evolves into several packs to meet customer expectations: Parking pack, mirror pack or the Easy-Pack tailgate for the Shooting Brake (standard from the Progressive finish). 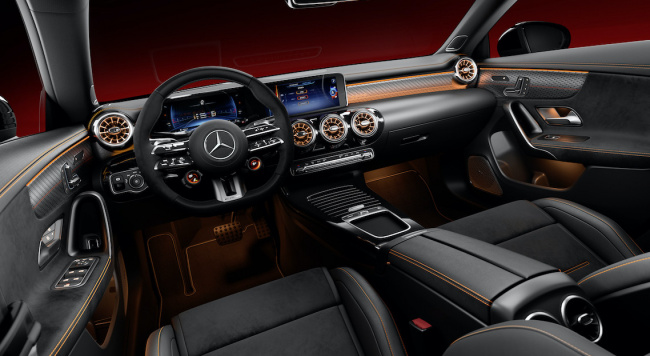 The most notable development is in fact under the bonnet, with petrol engines equipped with 48V micro-hybridization and a 7 or 8-speed DCT automatic gearbox. The 48V 10 kW system and the alternator-starter make it possible to start in electric mode and to recover energy during braking, as well as to give a little boost to the internal combustion engine during sharper accelerations. In essence, the CLA offers two powers: 136 hp or 163 hp. The diesel variants are still relevant, with the 180d (116 hp), 200d (150 hp) and 220d (190 hp).

The more powerful and faster to charge plug-in hybrid

The 250e plug-in hybrid variants receive, as on the Class A and B, an evolution of the electric motor. This gains 5 kW and reaches 80 kW (109 hp), for an unchanged cumulative power (218 hp). The battery can be recharged on alternating current up to 11 kW instead of 7.4 kW until now. In direct current, the power of 22 kW makes it possible to go from 10 to 80% of battery in 25 minutes. 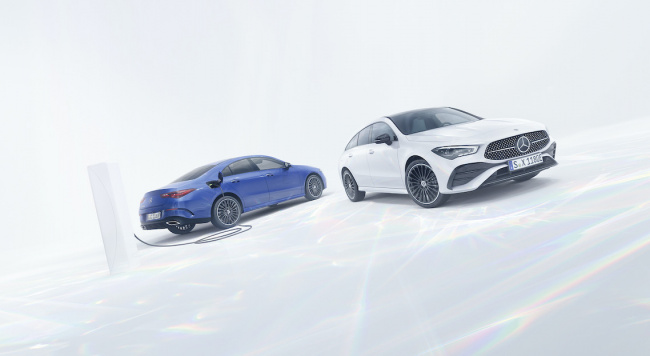 The AMG variants are also affected by these alterations, with a specific grille with blades and a 48V system with belt generator-starter for the CLA 35 4Matic, or even an AMG Performance steering wheel as standard. The 45 S 4Matic+ variant receives an AMG Street Style special series. It is distinguished by a specific matte gray livery completed by checkered stickers marked with a fluorescent orange AMG logo on the bottom of the doors and fenders as well as on the mirror caps.

Mercedes has not yet revealed the prices for this restyling, but they should be higher than previously. The current entry-level starts at €39,049 for the CLA 180 in Progressive Line finish and €40,249 for the Shooting Brake body.

Mercedes Class A and Class B restyled: the game of the seven differences