BMW M3 CS: the sports sedan already on the run! At the dawn of its presentation, the BMW M3 CS is already on the run on the web. Everything we already know about this German sports sedan close to an M4 CSL.

A few days before its first official release, potentially at the end of January, the BMW M3 CS is already taking off with a major leak on the internet. The first official photos were unearthed and then published on several Instagram accounts and forums such as Bimmerpost. Update on what we already know.

After the M4 CSL, radical and 100 kg lighter than a Competition variant, the M3 sedan will soon receive its CS version, for Competition Sport. Like the previous generation, the M3 “G80” will therefore be entitled to this even sportier and more exclusive version, even if the M4 CSL retains the prize for the moment with its 1,000 copies for the whole world and its 178,000 € per unit in France.

The M3 CS, it will be more civilized and usable on a daily basis since it should keep its rear seat and the Harman Kardon audio system. Unlike the M4 CSL, it is entitled to the latest generation iDrive 9 large screen. On the other hand, it takes from the coupé the yellow Laser headlights, the front blade, the hood or even the bucket seats with carbon backrests. A material that is also found on the central console or the front blade. On the other hand, the members of the Bimmerpost forum are already surprised by the absence of cup holders, essential for some customers who never drive without their thermos of coffee…

According to initial information, the future M3 CS should offer only four colors: Signal Green visible in the photos, but also more classic shades such as Brooklyn Gray, Black Sapphire and Frozen Pure White. The model could be equipped with rims in black or bronze finish, while carbon ceramic brakes could be offered as an option.

According to internal documents leaked last December, the M3 CS should gain a handful of horsepower over the regular M3 sedan. The six-cylinder 3.0 biturbo could climb up to 550 hp like the M4 CSL, or 40 hp more than the M3 Competition. To get all that power through, the CS could use an adaptive M xDrive all-wheel drive, and an eight-speed Steptronic automatic gearbox. For the record, the M4 CSL remains faithful to the propulsion but only offers an automatic transmission. 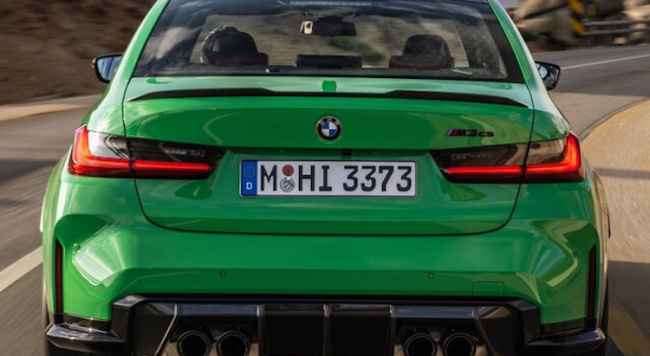 The future M3 CS could, like the M4 CSL, be produced in limited numbers. For the moment, we do not yet know if BMW intends to offer more than a thousand copies, or if France will be well served or will pass its turn. The penalty, reinforced in 2023 with a ceiling of €50,000, could tip the scales in the wrong direction.

BMW: all the new features expected in 2023

BMW 3.0 CSL: all the official info and photos