Ford now wants to offer a new, even stronger image. To prove it, the brand invited us to try the Mustang Mach-e GT in extreme conditions.

The world changes. And it’s not the automotive industry that will say the opposite, where all the players are trying to find a new way to reconcile their historical DNA with market demand. On the side of Ford, it gets stuck. Despite the appearance of the Ford Mustang Mach-E which has already violently turned a page in the manufacturer’s history, the Blue Oval still has a watered down image on this side of the globe.

These are the scars of long years of distinction between Ford USA, and Ford Europe, born of the merger between the British and German branches. If bridges still existed over the Atlantic, from the 90s, the brand launched the One Ford movement to close ranks, and become one. But there were still models specific to the European market, while the real icons were missing. But if the Mustang, Mach-E or Explorer have since been able to cross the ocean, Ford is going to give it a big sweep with the new Adventurous Spirit movement. 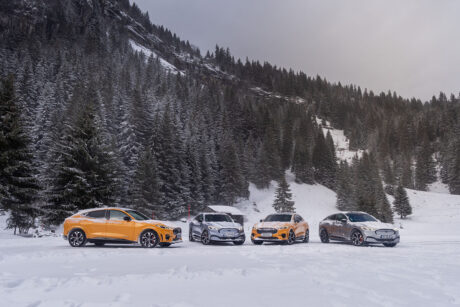 A new adventure for Ford

With this new vision, Ford plans to affirm its origins and break away from its image of a fake German brand. It will put away for this, without passing them through the 100% electric box, the small Fiesta and Focus, the S-Max and C-Max minivans, the Mondeo sedan and the EcoSport crossover, among others. In other words: all models that no longer carry the image sought by the brand. But also, it is clear, models that are no longer in tune with the market, always more bulimic SUV with stretched dimensions.

And this is what this new strategy tends to prove, with which Ford will concentrate above all on this type of vehicle, capable of carrying the desired US image. They will be divided into four large families. We will find the line there Urban Escape, with urban models like the Ford Puma. The Adventure Active series will focus on SUVs designed for family use and for exploring new horizons. Almost unprecedented, the range Ultimate Outdoor will emphasize robustness with the arrival of vehicles with Yankee blood, like the Bronco, which will be officially imported.

Finally, Ford will not neglect its sporty fiber with the family Wild Performance, where the Ford Mustang Mach-E is already located, which we know as one of the first pillars of the inevitable electrification of all these next ranges. Because this is also where Ford wants to go, going from 75 EV orders per day in Europe, to 2000 daily units in 2024. Ford therefore does not want to be a niche manufacturer, but it ventures on a road slippery where she will have to do it quickly and well to achieve her short-term goals. And to better show us the philosophy Adventurous Spirit and all the art of jumping on slippery ground, the manufacturer entrusted us with a Mustang Mach-E GT on the Flaine ice circuit. 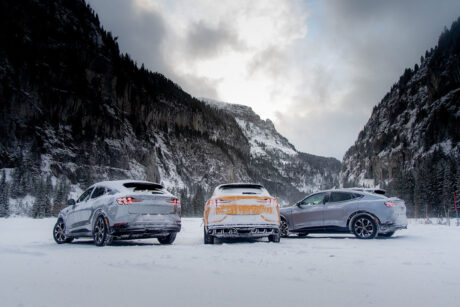 An elephant in a china shop

This SUV, we already know it. And this is particularly the case in its GT version which left us with fond memories during its official presentation: its insolent temperament has everything of a Mustang. If that’s not enough to make it a real Mustang, the Mach-e is certainly the Mustang of SUVs: it overflows everywhere, whether in terms of power or at the level of the rear axle, always quick to get out of its way. That announces the color.

But on the ice, it is better than ever not to leave the brain in the glove box, as we did on the asphalt of a road closed for the occasion. Despite the presence of studded tires, the physics are there, and the more than 2.2 tons of the SUV are just waiting to go straight. This therefore calls for strong neural connections and has a lot of finesse in the execution of commands, finesse that does not facilitate circumstantial boots. Something to feel like an elephant in a china shop.

Especially since all the excesses are paid in cash here, sometimes with too much brake and a shaken ABS, sometimes a saturated front axle. The solution: lie and deceive electronic crutches by caricaturing movements and stepping out of your comfort zone. One of the methods to achieve this thus consists in throwing the car into a nose-bum before the turn with a net of brakes, keeping the angle at the steering wheel more than necessary, and abruptly putting it back in the axis with a brisk and brief acceleration. If the choreography is well done, you then slide off the four wheels, without excessive drifts of the train which must be prohibited in any case: any attempt at premature counter-steering makes the systems understand the deception and can then send you into the wall of snow. Not easy. 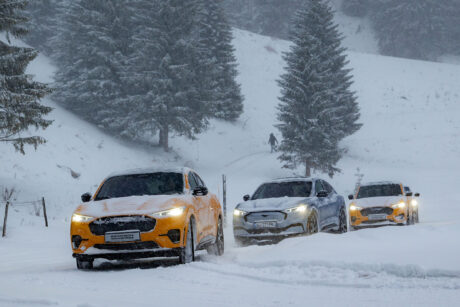 The electric fairy at the service of motor skills

If the benefits of the electric fairy are multiple, those brought during a driving on snow or on ice make it possible to convert more than one. In that even the best integral transmissions by mechanical shaft will never show the same instantaneousness and precision of a transmission ensured by two independent electric machines. It is only after having engulfed in the very small window, between understeer and spin, that it will then be possible to maintain sliding in a plume of powder.

Obviously, such an exercise is very far from all the notions of efficiency that the electric car wants to put forward. Notions that we have certainly forgotten that day, since we were not there for that. However, we still wanted to immortalize the consumption meter. After setting a record for the Automobile Propre editorial staff with an average of 69 kWh/100 km the first time, we have climbed here to a value of 82 kWh/100 km, or the equivalent of 110 km of autonomy in these conditions. . But it is of course perfectly useless to take into account these energy data since they do not represent any reality. 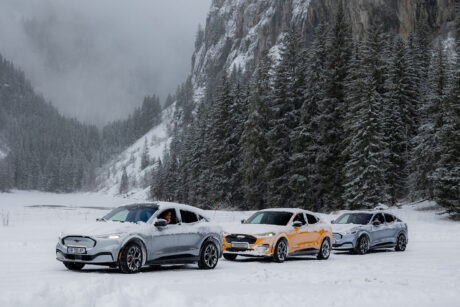 If its mass is sensitive, the Mustang Mach-E has demonstrated on asphalt as on snow that its dynamic capacities can be more akin to that of a (very) large sedan rather than those of an SUV. Most could therefore find their account with the new “all-SUV” strategy wanted by Ford, even with an electric drivetrain. But the road is still long for the manufacturer, which will then have to alert all its indicators to know if it is on the right track. If the analogy with our driving session is confirmed, then the future will certainly be fun.

For the moment, the Ford Mustang Mach-E GT is one of the only representatives of this future made in the USA. Remember that it is displayed at a price of €87,200.