Volkswagen Multivan 1.4 eHybrid: our test of the van without penalty

You swallow the miles on the long, monotonous straights of the Frankfurt, Germany area and quickly the feeling of driving a utility wears off. And for good reason, despite his appearance of a mover, the new Multivan is not one.

Although it offers 7 seats, a cubic style and exemplary modularity, the Volkswagen van is based on the MQB platform common to several models of the group, such as the Tiguan, and no longer on that of the Transporter. Steering wheel in hand, the metamorphosis is radical. Like any well-born car, this big beefy frees himself from the curves with ease and accepts the roughness of the coating without batting an eyelid (thanks to the optional DCC controlled damping, invoiced at € 1,396). Supplied with a DSG double-clutch automatic gearbox, it makes comfort and ease of use its leitmotiv.

Volkswagen’s ambition is beyond doubt, the Multivan is now a family-oriented model doomed to replace minivans, so shunned by customers that they now belong to endangered species. Conversely, leisure vehicles are booming and this replacement for the T6.1 intends to take advantage of it.

Crowned with a flattering image, the Combi family was not going to stop there. The new Multivan has a neat style, which can be brightened up by opting for a two-tone paint (option at € 3,068) that its hippie ancestor would not have denied. The very vertical stern lends itself more to criticism, but let’s not forget that the vocation of this beautiful baby is practicality and as such, the interior does not disappoint.

Already, at the outpost, the quality of presentation has nothing to envy to “conventional” vehicles. The materials are of a satisfactory quality, the finish is clean and the level of equipment similar to that of a Golf 8, for example. The Multivan also borrows from the compact some of its driving aids such as pedestrian detection, front and rear cameras, adaptive cruise control, line-keeping assistance and even “Travel Assist” which combines several aids to offer a quasi-autonomous driving mode.

However, its biggest asset is its spaciousness. Seven occupants can take place on 7 individual seats which can be removed from the vehicle if necessary. The advantage of these removable seats is to be able to arrange the seats as the customer wishes: everyone facing the road, or two rows facing each other. These seats are lighter than those of previous generations (-25% with a weight between 23 and 29 kg depending on the options, such as heated seats) and can be handled alone.

Another novelty in this cabin, a sliding module can move on a rail between the front seats and the rear of the cabin. Between the foundations of 1is row, it acts as storage, but once pushed back, it reveals a retractable shelf for the use of passengers. 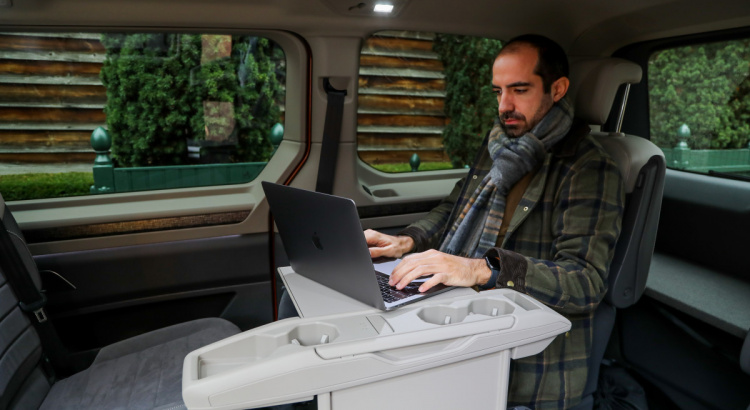 Large families will be able to choose between two sizes of Multivan: one short of 4.98m and another with extended overhangs of 5.18m from the grille to the trunk. With 1.90m high, it loses 8cm compared to the previous one and can therefore slip into underground car parks. The aerodynamics also benefit, which slightly affects their appetite for fuel.

In the consumption department, precisely, the van borrows the plug-in hybrid engine from other models of the VW group which allows it to escape (for the moment) the severe penalty reserved for vehicles of this caliber. This new version, called eHybrid, develops 218 hp and can travel about 45 km (WLTP data) in all electric. During our test, carried out mainly on the secondary network, we did not cover more than 30 km in “zero emission” mode.

On a mixed cycle, with 2 passengers, we noted a fairly decent average consumption of 6.8l of gasoline per 100 km, without actually adopting eco-driving. The engine range also includes two petrol units of 136 and 204 hp which will be supported next year by a 2.0 TDi diesel of 150 hp.

On the price side, the bill is quite steep with an entry-level petrol displayed at € 47,400 and up to € 75,640 in Life finish with the 1.4 eHybrid engine. Our Energetic trial version is exchanged for € 63,720 in short chassis and € 65,480 in long chassis, excluding option. Some competitors are less expensive but often incur an ecological penalty exceeding € 20,000 … 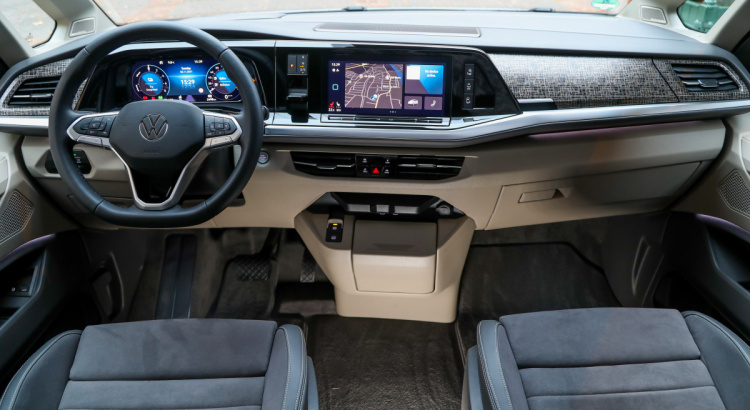 New family model in its own right, the Multivan successfully breaks free from the world of utility vehicles. A wise choice for large families looking for space.

To date, no competitor is available in a plug-in hybrid escaping the penalty