Suzuki S-Cross 2022 test: our opinion behind the wheel of the new compact SUV

He is new ? Yes, but not that much. Yes Suzuki talks about a new generation of S-Cross, it does not take long to see that this version takes a lot of the previous opus, launched in 2013 and remodeled in 2016.

For 2022, the front panel considerably modernizes the assembly and the rear part, with marked shoulders, has nothing in common with the old model.

But the glazed surfaces remain and the template (4.30 m) does not change an inch. The platform is unchanged, the engine is also the same as before.

Is he a hybrid? Yes, but not that much. This 1.4 Boosterjet has a light hybridization : an alternator-starter delivering up to 10 kW and 53 Nm of torque can assist the 4-cylinder gasoline engine in certain operating phases.

Advantage: the SHVS device saves a few deciliters of unleaded, weighs only about 25 kg and gives access to free registration in almost all regions of France.

Disadvantage: it remains unable to move the SUV on its own, in 100% electric mode.

This 129 hp turbo engine delivers honest performance and has the advantage of being compatible with a real automatic converter box, six-speed, discreet and smooth but a little slow.

It can also adapt toa 4 × 4 all-wheel drive, called AllGrip, which makes the S-Cross a good little mountain dweller, especially with Snow and Lock modes; the first increases the distribution of torque to the rear axle, which the second drives constantly, under 60 km / h. 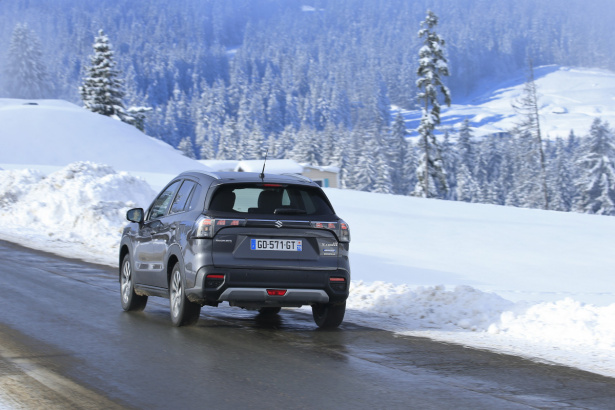 No big change is to be noted in terms of road performance, despite the running gear slightly modified in terms of silentblocs and suspension springs.

The behavior is very healthy and considerate but remains far, side dynamism and precision, of what offer a Peugeot 2008 or a Ford Puma. The S-Cross Allgrip, during our test in the mountains, also posted an average fuel consumption of 7.4 l / 100 km.

On board, is it new? Yes, but not that much. The subtly modified presentation retains its architecture: it seems old-fashioned and rubs shoulders with low-value materials. But the simplicity of the ergonomics is appreciated.

Here, it is enough to turn a dial to adjust the temperature and each button corresponds to a single function. It seems obvious but, within the competition, we sometimes go to great lengths to complicate the use!

The S-Cross, with a bit of humor, could be compared to smartphones intended for older people, with very easy to understand features: its simplicity can be a purchase criterion. 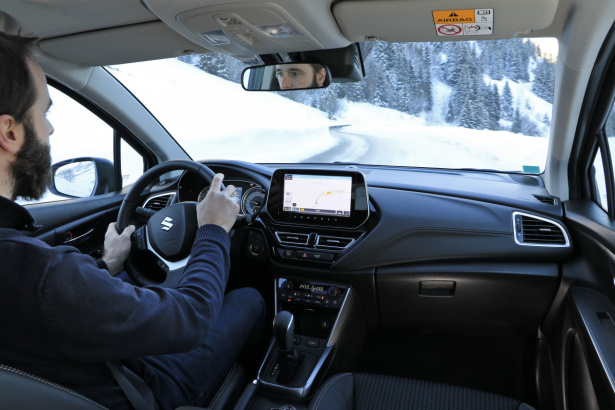 The Japanese novelty, produced in Hungary, however offered a new, more modern multimedia interface and on a 7-inch screen (9-inch in Style version), which is however sluggish.

And the Japanese still ignore digital instrumentation, even going so far as to keep frail little plastic legs, to be pressed on each side of the counters, to scroll through the menus of the small central screen, between the tachometer and the tachometer.

Nothing changes either in terms of livability. The new S-Cross retains its nice legroom at the back, where only the headroom can seem a little tight for more than 1.80 meters.

The trunk, rather large with 430 liters of capacity, takes advantage of a removable floor to provide a flat surface when the 2 / 3-1 / 3 backrests are folded.

If it is in our eyes a deep restyling rather than a new generation, this S-Cross is renewed enough to find colors. We will always blame him for his outdated dashboard and its too light soundproofing, but its endowment is progressing.

It carries in series a autonomous emergency braking with pedestrian detection, a reversing camera, sign recognition and adaptive cruise control.

It can also, depending on the finish selected, add a 360 ° camera, blind spot monitoring,“hands-free” access / start and a reverse traffic alert. What will prove to be more reassuring and pleasant to live in.

And still cheap? Yes, but not that much: the enrichment is found on the base rate (€ 29,070), up, but the price / equipment ratio is flattering. 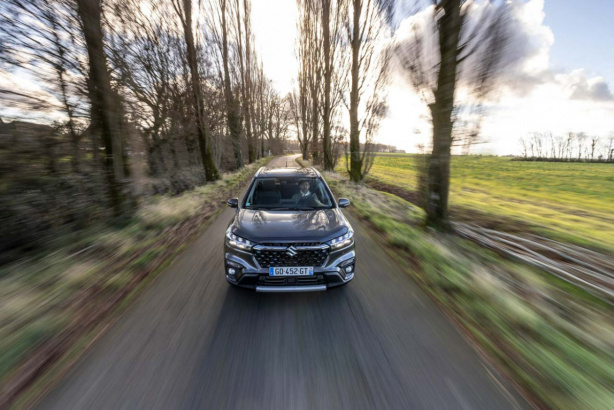 More elegant and better equipped than before, the “new” S-Cross offers a good price / equipment ratio and is one of the few models in its class to be able to benefit from four-wheel drive. Too bad, however, that its interior presentation betrays the age of its entrails.

Swace and Across: Why Suzuki Sells Toyotas?

When the Suzuki Jimny turns into a motorhome

Mercedes T-Class test: our opinion at the wheel of the MPV that claims to be premium…

Madame Mercedes is happy to introduce you to her daughter, baptized Class T, born in France and first cousin of...

Why the price of electric cars will increase until 2026

The arrival of the electric car was accompanied by a promise of lower prices over time. This is also one...

An association considers a road in this city too dangerous

In Nice, an association considers the Prom' too dangerous and calls for the installation of radars and the removal of...

Electric cars, charging operators: towards the emergence of “new GAFAMs”?

Electromobility is one of the new playgrounds for innovative companies. A sector that could encourage the emergence of giants of...

Amazon sales: the Huawei MateBook D 16 laptop is on sale!

MotoGP: Yamaha and Quartararo, their last year of collaboration?