A robot performed a surgical operation without human assistance with a “significantly better” result! 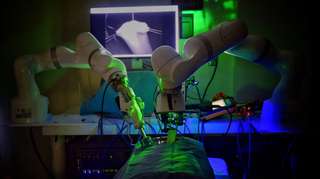 A team of researchers has succeeded in developing an autonomous surgical system. For the first time, a robot has managed to perform an intestinal anastomosis by laparoscopy without being guided by a human.

The surgical robots are not completely new, and many models already allow to improve the precision of gestures or to perform a remote operation. However, until now these devices have always been guided by humans. Researchers from thejohns hopkins university in the United States wanted to make operations fully automated and developed a robot capable of carrying out a anastomosis bowel without human assistance.

In an article published in the journal Science Robotics, the researchers detail the improvements made to the robot dubbed Star (Smart Tissue Autonomous Robot). He had already succeeded surgery in 2016, but with a large incision that required human intervention. The new model succeeded in joining two parts of the intestine in one operation by laparoscopy.

Results “significantly better” than those of a human surgeon

the robot was equipped with specialized suturing tools as well as a endoscopy 3D monochrome. They used machine learning to create a three-dimensional representation of the tissues to be manipulated. The surgery was successfully carried out on pigs without any human assistance.

« Star performed the procedure on four animals and achieved significantly better results than humans performing the same procedure “Said Axel Krieger, one of the authors. According to the researchers, such robots surgeons will be able to democratize access to specialized operations, while offering more uniform results and a better outcome for patients.

A dead iPhone can be hacked!

You will also be interested Phishing: what is it and how to prevent it? Phishing, or phishing in English, is...

CCNA2 training: get 89% off thanks to this good plan

Are you in professional retraining or want to progress in your career by taking the official Cisco CCNA 200-301 certification...

SketchUp: get 89% off the full course

Amateurs, students or professionals in the fields of technical drawing and architecture, you want to train in 3D modeling with...

Who invented the metaverse?

The metaverse was the result of long decades of reflection, whether by science fiction authors, engineers or even simple geeks....

A robot performed a surgical operation without human assistance with a “significantly better” result!