These glasses for the blind detect obstacles by vibrations

Researchers have developed a new navigation system for blind people. Cameras integrated into the glasses detect obstacles and report them using a haptic feedback sleeve.

[EN VIDÉO] Panda, the guide for the blind The small Panda Guide helmet, connected to a smartphone, can recognize an object (keys, telephone, bottle, computer, etc.). It then guides its user, as explained by Arnaud Lenglet, founder of the start-up.

Navigation is one of the most difficult tasks for visually impaired people. Different searches have tried to provide help through technology, but nothing has yet succeeded in supplanting the white cane. A new device, designed by researchers from technical university of munich, could, however, be a game-changer.

The invention is composed of two elements. The first is a pair of 3D printed “glasses”. As tracking systems movements virtual reality headsets, they use cameras to record a stereoscopic image of the environment in order to build a 3D map. The researchers used an Intel RealSense D415 camera, which has the advantage of capturing infrared, allowing the system to operate at night. 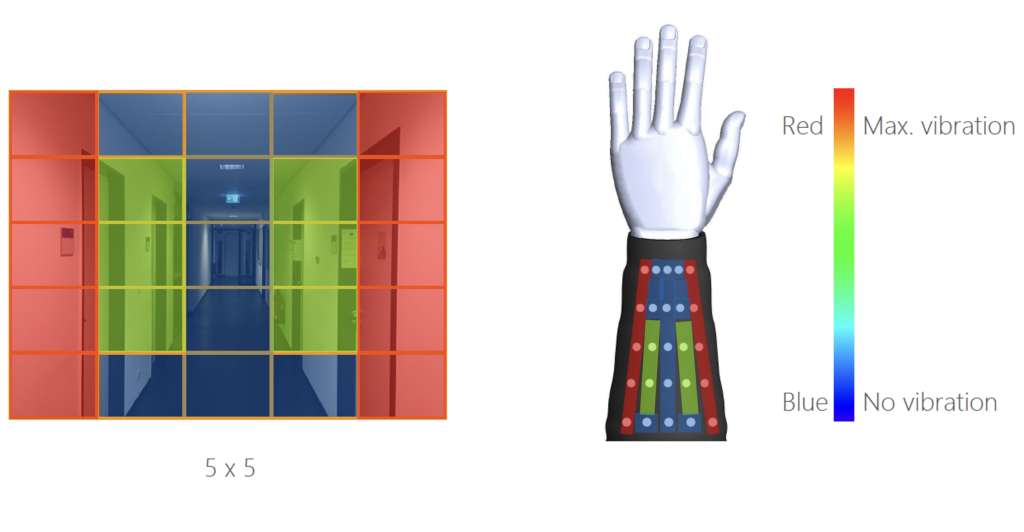 The translation of the image captured by the glasses on the vibrating sleeve with, in red, a more intense vibration to signal a nearby obstacle. © Manuel Zahn and Armaghan Ahmad Khan, Technical University of Munich

A haptic handle for a hands-free system

The glasses are connected to a vibrating sleeve. Thanks to a grid of 25 actuators, it signals the presence of an obstacle by indicating its location and distance to the wearer. The wearer can thus navigate without having his hands encumbered. The system has two modes of operation: indoors with a maximum detection range of three meters, and outdoors with a minimum range of two meters to detect obstacles in the distance. Thus, the device can operate in addition to the cane.

Volunteers who tested the system managed to navigate correctly in up to 98.6% of cases with only one of the motors vibrating, and up to 70% of cases in more complex situations with multiple haptic feedback. The researchers intend to continue to improve their invention, and in particular hope to integrate object recognition in order to generate paths to help navigation in large open spaces.