Crit’Air sticker: how does it work? All the info

(Updated on 06/01/2021 at 2:45 p.m.) In 2017, the car sticker and the green badge had spawned a new offspring. Four years later, the Crit’Air certificate to be stuck on the windshield, is intended to distinguish the cleanest and most recent vehicles (electric, but also recent gasoline, even diesel) of the old cars and motorcycles, considered more polluting. It is these macaroons that allow – or not – to enter the heart of the Parisian agglomeration from June 1, 2021.

=> Greater Paris: old diesel can no longer circulate during the day

The 3 essential points to remember:

Auto-moto.com invites you to know everything about this pastille in this special report. Refer to the summary opposite to discover all the aspects that interest you.

The air quality certificate is available since 1is July 2016, on the Internet (no need, therefore, to rush to your tobacconist). You have to pay 3.62 euros to get it (shipping included) since March 1, 2018. Previously, the price was 4.18 euros. The pastille will be valid for several years, so it is not a new annual sticker, as France saw it from 1956 to 2000.

After your purchase on the website www.certificat-air.gouv.fr, the badge will be sent to you by post. To acquire the sticker, you need to bring your vehicle registration document.

Note that it is now possible to acquire the certificate by simple mail, outside the internet. To do this, you must complete a specific request form and send it to the following address:

=> How to buy the anti-pollution sticker? Detailed info

Watch out for scams! A German site thus offers you the purchase of your sticker for the modest sum of 19.85 euros… If the badge sent in the end is indeed legal, you will probably be able to do without the additional cost.

To categorize the vehicle fleet, the Ministry of Ecology has created a scale based on Euro standards. Six different types of pads can be glued to the windshields. Originally, the state had announced a system based on six different buttons before returning to four. The details of the new nomenclature were officially revealed on June 21, 2016:

Green and white dot: Crit’Air
Zero emission vehicles 100% electric or hydrogen
=> This sticker can be applied to the cleanest vehicles available on the market today. Ex: Renault Zoé, Toyota Mirai…

Not eligible for obtaining a Crit’Air tablet:
All gasoline and diesel vehicles registered before December 31, 1996, catalyzed or not.
=> This category includes the oldest cars and vintage vehicles. Ex: Peugeot 205 1.8 D 1993, Volkswagen Golf GTI 1989, Jaguar Type-E 1963 … 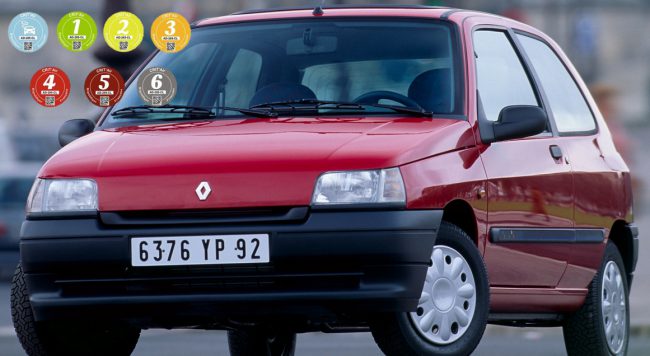 => More details on the different categories of the new sticker 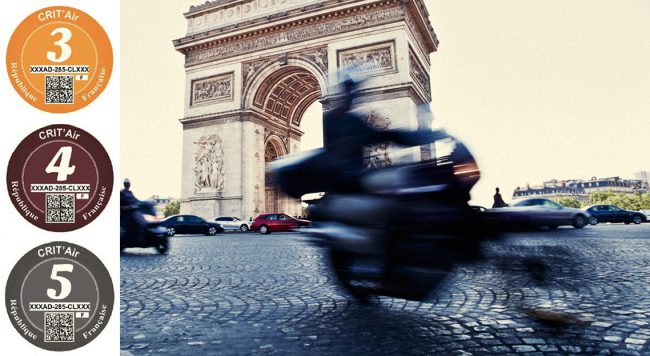 The new air quality certificate allows local authorities to take specific measures. For example, a municipality may decide to reserve parking spaces vehicles fitted with the green and white sticker. Or allow the cleanest vehicles to circulate during a pollution peak (replacing or replacing the current system of even and odd plates). This system is called “Differentiated circulation”

=> Differentiated circulation: how does it work? Who can drive in the event of peak pollution?

Mayors or prefects will also be able to implement measures that are more unpopular among motorists. Thus, the classification opens the door to ” restricted traffic areas “Now called” low emission zone “(ZFE). A municipality can thus consider prohibiting access to a city center, temporarily or definitively, to vehicles that are not equipped with certain buttons. This is particularly the case in Paris, which restricts access inside the A86 motorway to pre-2006 diesel from June 1, 2021.

When the application decrees are adopted, by March, you will risk a fine if your vehicle does not have tablets or if it is considered too polluting to circulate. The amount of this fine is set at 68 euros. It is considered to be a third class offense, namely:

In its definition, the new lozenge is more of a carrot than a stick. The aim is more to encourage the purchase of low-emission or newer vehicles than to penalize cars with the highest emissions. Contrary to what was initially envisaged, in the summer of 2015, the most polluting vehicles were not blacklisted. Categories 4, 5 and 6, which were to include “heavy smokers” were thus deleted in the final version of the project.

On the other hand, based on Euro standards, the government has prioritized readability … at the expense of cleanliness. The only criteria taken into account are the type of fuel and the date of manufacture. Thus, objectively polluting vehicles are classified among the cleanest, provided they are relatively recent (for example, a Porsche Cayenne and a Toyota Prius can coexist in the same category). On the other hand, Ségolène Royal, then Minister of Ecology, had clearly decided in favor of the gasoline engine over the diesel engine. Crit’Air and Crit’Air 1 levels are reserved for non-diesel, while Crit’Air 4 and 5 categories are reserved for diesel engines.

Everything about the new Toyota Prius [ESSAI]